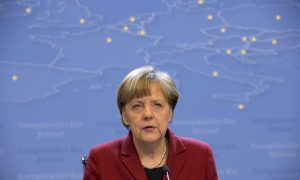 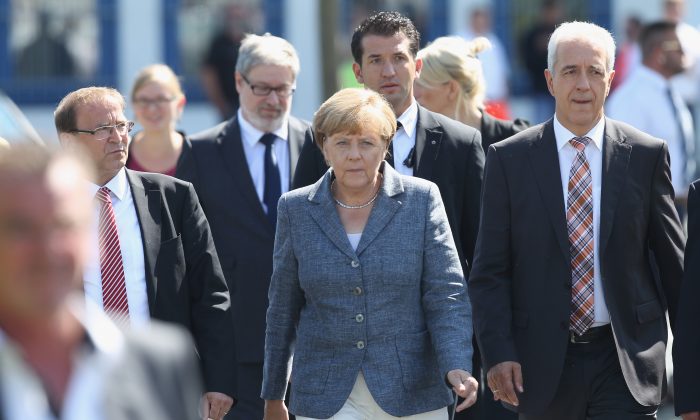 German Chancellor Angela Merkel, flanked by Heidenau Mayor Juergen Opitz and Saxony Governor Stanislaw Tillich, arrives to speak to the media after spending over an hour visiting the aslyum shelter that was the focus of recent violent protests on August 26, 2015 in Heidenau, Germany. (Sean Gallup/Getty Images)
Europe

HEIDENAU, Germany—Chancellor Angela Merkel was met with jeers Wednesday as she traveled to a German town at the center of a recent wave of far-right anti-foreigner violence, delivering a message of support for refugees as many look to her for leadership in handling the European migrant crisis.

“It’s shameful and repulsive what we experienced here,” Merkel told reporters in Heidenau, a town near the Saxony capital Dresden in eastern Germany where a far-right mob over the weekend hurled bottles and fireworks at police protecting a temporary shelter being set up for 600 refugees.

The violence in Heidenau and a series of recent arson attacks against asylum shelters elsewhere have catapulted the migrant crisis to the top of the political agenda in Germany. While most Germans have been welcoming — with many volunteering their time to help refugees and some even opening their homes — a vocal minority has protested the arrival of so many foreigners in such a short time.

The violence in Heidenau and a series of recent arson attacks against asylum shelters elsewhere have catapulted the migrant crisis to the top of the political agenda in Germany.

Demonstrating this trenchant opposition more than 100 far-right protesters jeered and sounded car horns as Merkel spoke in Heidenau. Some protesters shouted “Lying press!” while at least one woman held a placard denouncing the chancellor as a “race traitor” — a phrase used by the Nazis to refer to people who dealt with or had relationships with Jews.

Authorities expect the number of refugees coming to Germany will reach 800,000 this year — a fourfold increase on last year. Worryingly, the number of attacks against refugees and asylum shelters has also surged. Authorities registered 202 such attacks — including eight cases of arson— in the first half of the year, roughly twice as many as during the same period in 2014.

Despite strong condemnation, the attacks have continued in the second half of the year. Police arrested two intruders with knives entering a refugee home in Parchim in eastern Germany late Tuesday. The same night, a man threw a burning object at a planned home for 56 refugees in Leipzig. A mattress caught fire, but it was quickly extinguished, the German news agency dpa reported.

While attacks have taken place across the country, they have been particularly prevalent in former East Germany, where people’s experiences of foreigners have been more limited than in the west of the country. Federal rules mean refugees are distributed more or less equally across the country, including to regions where anti-foreigner sentiment is strong, such as Heidenau.

The town is situated south of Dresden, where a group calling itself Patriotic Europeans against the Islamization of the West drew up to 25,000 people to its weekly marches at the start of the year. While their numbers have declined again, experts have warned that far-right extremists including members of the National Democratic Party, or NPD, are using the refugee issue to stir up fear and resentment among locals. Friday’s riots began hours after an NPD-organized protest against the asylum shelter, though the party has since distanced itself from the violence.

Speaking to reporters after meeting aid workers, local officials and refugees Wednesday, Merkel thanked those “who have to endure hatred.”

“We need to use all our strength to make clear that we won’t tolerate those who call the dignity of others into question. There will be no tolerance toward those who aren’t prepared to help where help is needed,” she said, urging Germans to speak out against anti-foreigner sentiment in conversations with their families, friends and church groups.

Merkel’s decision to travel to Heidenau followed calls in German media for her to show greater leadership in tackling the refugee crisis. This week, she declared that her office would take charge of coordinating the issue across government departments.

But she also reiterated her call for European countries to finally decide on common rules for refugees, drawing a comparison to the bloc’s hard-won agreement on the bailout for Greece.

“These questions will occupy us a lot more than Greece and the stability of the euro,” Merkel said in a recent television interview. “The asylum topic could be the next big European project where we can show whether we’re really able to act together.”

A 10-point plan put forward by Germany to solve the refugee crisis includes declaring countries in the western Balkans safe states, meaning that people from there, who make up about 40 percent of those coming to Germany, wouldn’t be able to apply for asylum in most cases.

“We need to send those who are highly unlikely to get asylum back home. That’s tough, but Serbia, Albania, Kosovo are all countries where there’s no civil war at the moment,” Merkel said at a town hall meeting Tuesday.

Berlin also wants to set up reception centers for migrants crossing the Mediterranean, so that their asylum requests can be processed in Italy and Greece. It also wants them better distributed around the European Union; Germany in the first half of 2015 has seen 43 percent of asylum applications made in the bloc.

“Germany, which is economically stronger than others, needs to bear a greater burden,” Merkel said. “But three or four countries out of 28 can’t carry all the load, that’s not the European Union we want.”

Sigmar Gabriel, the country’s economy minister and Merkel’s deputy, said the fact that up to three-quarters of the 800,000 refugees may end up staying should be seen as an opportunity, not a problem.

“We’re a country that’s losing a lot of workers in the coming years because we’re thankfully living longer but sadly having fewer children. So many of those who are now staying are a chance for us to make the country younger and more attractive,” he said.