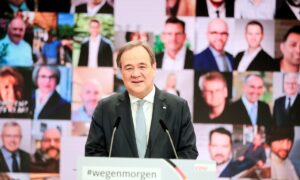 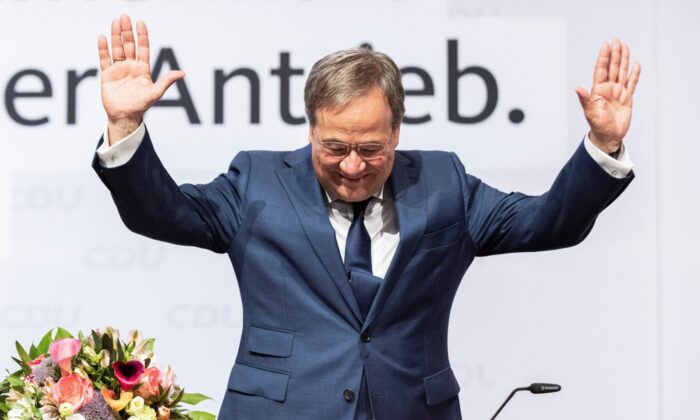 Germany’s most likely future chancellor is already saying what Beijing wants to hear. In an interview with the Financial Times published June 21, the leader of Germany’s Christian Democratic Union, the party of current Chancellor Angela Merkel, used phrases that could have been concocted by propagandists in Beijing.

CDU leader Armin Laschet, according to the Times, called China a “partner,” and sought to straddle a low fence between Germany allying with other democracies, and ceding at least some power to Beijing. The two approaches are not actually contradictory if an alliance of democracies fails to hold the line, which is exactly what NATO has been doing.

Laschet, according to the Times, “said the west should resist slipping into a cold war mentality when it came to its geopolitical contest with China,” telling the paper, “The 21st century is very different and the prism of how the world looked before 1989 offers limited advice.” He said, “We have a multipolar world [now] with different actors.”

Criticism of “cold war thinking” and indiscriminate promotion of a “multipolar world” that takes no account of the differences between democracies and autocracies, or the higher propensity for autocracies to go to war in order to acquire territory and become regional hegemons, are propaganda cards played frequently by Beijing.

China’s ambassador to Germany must be popping the cork off a bottle of “sparkling wine from multiple countries of the European Union” right about now, as Laschet is leading the pack to become Germany’s next chancellor in upcoming September elections. Polls indicate a win for Merkel and Laschet’s political party, the CDU, which is supposedly “center-right.” But Germany’s Greens, which are now “center-left,” are just slightly more likely to raise human rights issues with China. Given the strength of the Greens in Germany, a likely government would be a CDU-Green coalition, with Laschet as chancellor.

Laschet told the Times that many Europeans are skeptical of Biden’s (supposedly) tough stance on China. Like President Duterte of the Philippines, Laschet used scare words to deflect the conversation from Beijing’s human rights abuse, territorial aggression, and technology theft.

“The question is—if we’re talking about ‘restraining’ China, will that lead to a new conflict? Do we need a new adversary?” Of course Laschet knows the answer to his latter question. No sane country ever wants a new adversary. But the increasingly adversarial relationship with China is of its own making, and not new.

Laschet continued, “And there the European response was cautious, because, yes, China is a competitor and a systemic rival, it has a different model of society, but it’s also a partner, particularly in things like fighting climate change.”

Really? Beijing negotiated the world into the Paris Agreement of 2015, to immediately decrease U.S. and European emissions, while China continued to increase emissions until 2030. That doesn’t sound like a partner. It sounds like a slick abuser of Mother Nature.

Like Merkel, Laschet provides a rationalization for Germany’s failure to speak up about Beijing’s transgressions, which now include genocide, to maximize the profits of German industrial giants. China is Germany’s biggest trading “partner.” More than half of European Union exports to China in 2019 originated in Germany. German exports to China grew from less than $5 billion in 1991, to over $100 billion annually starting in 2018.

Volkswagen is a major beneficiary of trade with China, having gotten in early with its first factory there in 1984. Germany’s Siemens engineering, and BASF chemical, have also long prospered in China. In May 2020, BASF made its biggest ever single investment, a $10 billion high-technology plastic factory in Guangdong. BASF CEO Martin Brudermüller said last year that for BASF, China “isn’t just the biggest market, it’s the fastest growing.”

While German exports to China increased in early 2021, they decreased to the United States and Britain. That gives yet more political leverage to China relative to Germany’s old allies.

According to Matthew Karnitschnig writing in Politico.eu, “That reliance is the main reason Chancellor Angela Merkel has preferred to ignore calls for decisive action on China in response to its actions in Hong Kong and elsewhere, opting instead for a wait-and-see approach in the hope the tensions would dissipate.” Karnitschnig continued, “while Germany pretended to be upset over China’s human rights abuses, Beijing feigned offense at Berlin’s ‘intrusion into its domestic affairs.’” Karnitschnig alleges that Merkel’s ostensibly provocative support for human rights in China, like meeting the Dalai Lama, are nothing-burgers and “promptly forgotten” by both countries.

But Laschet can’t even eat a nothing-burger properly. He recently told the Times that Germany should speak out about “critical issues,” and “make clear” Germany’s expectations on human rights and reciprocity (the latter is an issue close to the corporate heart). But the German leader undermined his human rights message with, “I’m not sure that always speaking out, loudly and aggressively, in public about a country’s human rights situation really leads to improvements on the ground.” He said, “Often you can reach more in the area of human rights by addressing issues in private conversations with leaders of other countries than by talking about it in press conferences.”

Private, pro-forma discussions about China’s transgressions are exactly what Beijing, and other serial abusers, want.

Apparently, Germany is headed for more appeasement of Beijing. That never turns out well, and shows why the United States must consider not only an approach to China that rallies our allies, which is the strategy that President Biden is supposedly following, but also a unilateral strategy where necessary. If America restricts itself to following European public opinion, it could get stuck in Beijing’s wake. Sometimes America must lead.