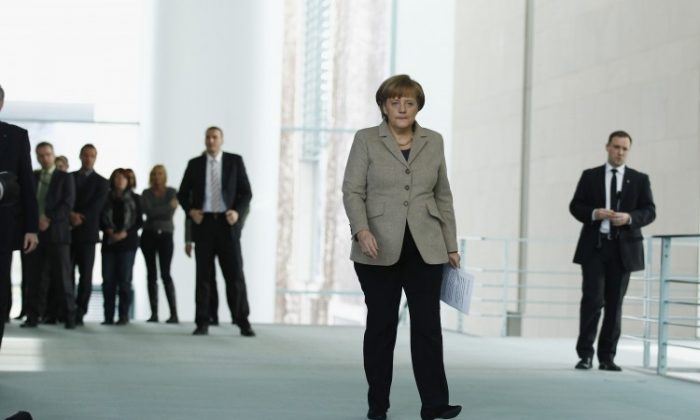 German Chancellor Angela Merkel arrives for a statement to Wulff's resignation at Chancellery (Bundeskanzleramt) on February 17, 2012 in Berlin, Germany. German President Christian Wulff is resigning following the launch of investigations by a state prosecutor into possible illegal benefits Wulff received from businessmen while Wulff was governor of Lower Saxony. (Photo by Andreas Rentz/Getty Images)
Europe

Following the resignation of his predecessor Christian Wulff on Friday, Joachim Gauck has been agreed upon by all major German political parties to become Germany’s official head of state. The affair has been hugely damaging to Merkel’s coalition government, however, with her FDP coalition partners rebelling in joining opposition parties to propose Gauck, runner-up to Wulff in the 2010 presidential election.

Merkel has been hugely embarrassed by her perceived misjudgement of the 2010 presidential nomination, favouring a then-politically expedient nominee in Christian Wulff over Gauck, an opposition candidate who largely eschewed politics in favour of promoting democratic values across Germany.

While he was passed over for the job of president in 2010, Merkel and Gauck do have a lot in common, and are said to share a deep respect for each other. Both grew up in the communist former East Germany, and Merkel is the son of a Protestant minister. Gauck was given the job of guarding the files of East Germany’s Stasi secret police following the fall of the Berlin Wall, and has used his position as a Lutheran pastor to travel to Germany, reminding citizens of the crimes committed against ordinary citizens by the deposed regime.
According to the BBC, Merkel said: “Let’s not forget that we have churchmen like Gauck to thank for the success of East Germany’s peaceful revolution.”

In a press conference following his nomination, an unassuming Gauck asked Germans for their patience as he learns his trade in the coming months. “I’m not Superman,” he said.