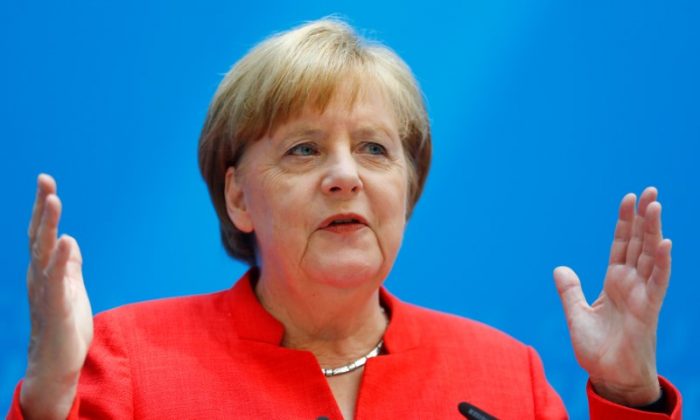 Merkel Avoids Collapse of Her Coalition, for Now

After intense negotiations, German Chancellor Angela Merkel and Christian Social Union Party leader Horst Seehofer reached an agreement on the evening of July 2 that will satisfy Seehofer’s concerns about unchecked immigration into Germany.

Seehofer, who also serves as Germany’s interior minister, had threatened on the evening of July 1 to resign. If he did so and managed to take members of his party with him, that would have been the end of Merkel’s governing coalition and would also have ended the 70-year-old partnership between his party and Merkel’s Christian Democratic Union (CDU).

Standing in front of the Konrad Adenauer House, the CDU headquarters in Berlin, Seehofer said, “We have a clear agreement on how illegal immigration could be prevented at the border between Germany and Austria in the future.”

The deal calls for transit centers to be set up in Austria, across from the German border. These would hold any immigrants who had been previously accepted by another EU country, who would then be repatriated to that country. This procedure would help prevent Germany from becoming a magnet for immigrants who had made their way into the EU.

Two obstacles may stand in the way of this deal taking hold.

Austria has yet to be heard from. Their permission and cooperation would be needed for setting up the transit centers. Observers of Austria’s politics doubt it will agree.

And then there is the question of how the third member of Merkel’s coalition, the Social Democratic Party (SPD), will react.

In 2015, the SPD defeated an effort by the CDU and the Christian Social Union Party to establish transit centers. If they now object as strongly to their creation as Seehofer did to their absence, Merkel may on July 3 face another threat to her coalition.