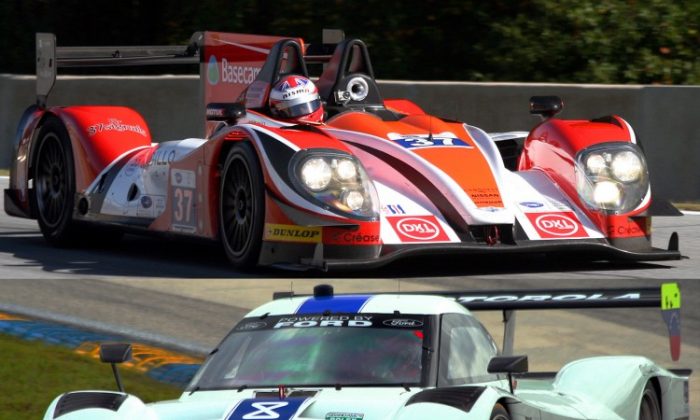 Sports car fans in North America have only a few more days to wait: on January 4, 2013, at a press conference at Daytona International Speedway, Grand Am’s Competition Director Richard Buck and IMSA/ALMS COO Scot Elkins will announce the class structure for the merged sports car series which will be competition in January 2014.

After NASCAR, which owns Grand Am and its Rolex Sports car series, bought the competing International Motor Sports Association and its American Le Mans Series in September, fans, teams, and car manufacturers have been waiting to learn the class structure of the resulting unified series.

Grand Am’s Rolex series boasts a solid field of about a dozen Daytona Protoypes as its top class. Slow and a bit primitive, these cars have never been fan favorites, but NASACR subsidies and solid series management has made the DP the rider of choice for a lot of teams for a lot of seasons.

Unfortunately, fans preferred the more exotic and technologically advanced cars of the rival series. Rolex had first-rate promotion and a great television product, but few fans ever attended a race or tuned in on TV.

The DPs put on good races, but they weren’t as fast as the competing series’ cars. Likewise, the Grand Am GT class was slower than the competition’s. Grand Am’s Rolex series survived only because of NASCAR money; as a business, it was a bust.

ALMS has usually followed the rules of the French Auto Club de l’Oueste, which organizes the Le Mans 24-Hour race. This meant ALMS teams could compete at Le Mans, and European teams could come to America to race—a real bonus for teams and fans alike.

However, difficulties with management, promotion and capitalization limited the appeal of this series. After 2008 most of the manufacturers pulled out of the top class, leaving only two or three LMP1 cars to contest the overall win by 2012, with another three P2 cars trailing behind.

Still fans preferred the more advanced P1 and P2 cars of ALMS—and its more advanced GTE cars, cars based on road-going models like the Porsche 911 and Corvette CR6.

The series’ problems were exacerbated by a terrible television product; poor direction left fans watching cars circulate under yellow flags, only to have the program cut to commercial once the race restarted, while mid-pack battles were missed and altogether too many “features” unrelated to racing clogged the broadcasts.

ALMS lost most of its live TV coverage in 2011, moving to mostly web-based streaming of its races—and with both access and reliability being issues, fans were severely disappointed. Teams and sponsors were also disappointed—limited TV exposure meant limited sponsor exposure which meant fewer sponsor dollars for teams. Despite having the most popular sports car product, ALMS was slowly going broke.

The announcement that the two series would be merged brought both joy and trepidation to sports car fans—joy because the competing series were killing the sport, and worry that the new series would use slow, archaic, “dumbed-down” machinery.

Everything hinged on one question: which classes would be included in the new series, and how would they be balanced?

Grand Am’s DP class seems likely to remain simply because it is the best subscribed—with a dozen or more entries, it simply cannot be ignored. But, fans really want ALMS-style P2 prototypes, and without fans the new series would fail like the other two had.

Could DPs be sped up enough to compete with P2s? (The P1 class was never considered for the new series; it was deemed too expensive.) Would fans watch if the P2s were slowed to DP speeds?

Another problem was that ALMS’ PC prototypes were almost as popular and almost as fast as the more expensive DPs. What would be done with those teams?

Even more worrying was that ALMS GTE cars were perilously close in speed to DPs. Yet this class couldn’t really be meddled with because it was the last place that auto manufacturers got involved in the series. A lot of fans loved the GTE class, and it arguably produces the best return on investment in terms of advertisement and vehicle sales. Slowing GTE cars would anger a lot of teams, possibly some manufacturers, and definitely the fans.

The task facing the organizers of the new series was difficult and delicate, and also crucial to the success of the venture. IMSA COO Scot Elkins asked for fan feedback to gauge exactly what the audience wanted and what they could tolerate, while Grand Am officials poured over data from P2 vs. DP comparison laps.

Meanwhile, drivers, team owners, journalists, and fans lit up the Internet with speculation, prediction, suggestion and analysis, dissecting every tweet, email, and rumor hoping for a clue about the future.

The waiting is almost over. Shortly after New Year’s Day, at the Roar Before the Rolex 24 testing event at Daytona International Speedway, series officials will reveal the shape of sports car racing’s future.

Reportedly, the structure has already been decided, and likely a few of the more important manufacturers and series principals have been informed.