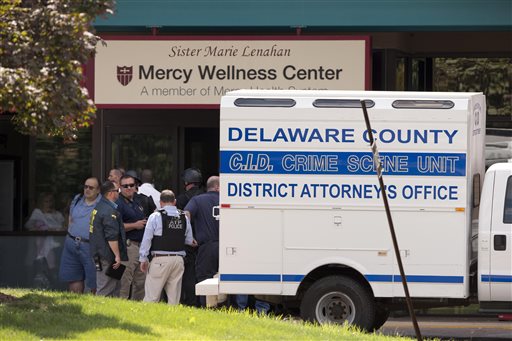 Investigators work the scene of a shooting Thursday, July 24, 2014, at Mercy Fitzgerald Hospital in Darby, Pa. A shooting at the suburban Philadelphia hospital campus has killed one worker and injured two other people. Prosecutor Jack Whelan says one of the injured is the gunman. (AP Photo)
Crime and Incidents

A shooting at the suburban Philadelphia hospital campus Mercy Fitzgerald has killed one worker and injured two other people.

Prosecutor Jack Whelan says one of the injured is the gunman. The shooting happened at the hospital’s Sister Marie Lenahan Wellness Center, which is attached to the hospital by a pedestrian bridge.

The hospital is a few miles southwest of downtown Philadelphia.

The department says a suspect is in custody. Police told WPVI that an individual came into the psychiatric unit and opened fire, killing a female employee and leaving a doctor with graze wounds.

The doctor is expected to survive after being taken to the Hospital of the University of Pennsylvania.

Sources said that one of the employees returned fire, injuring the shooter. The unnamed shooter is also at that hospital, in critical condition.

The 213-bed teaching hospital is part of the Mercy Health System, a large Catholic health care network serving the region. The hospital’s website says about 6,500 people work there.