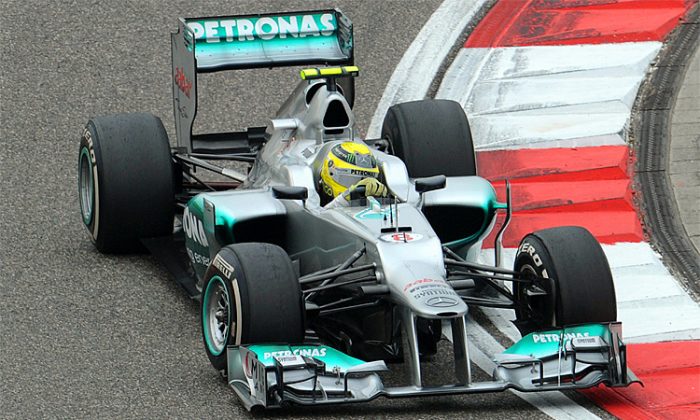 Nico Rosberg earned Mercedes its first Formula One pole since 1955, qualifying fastest for the Chinese Grand Prix with a lap of 1:35.121 around the 5.5-km, 16-turn track. After Rosberg set his fast lap he parked and watched the rest try to top him. No one came close.

“It’s a very special day for me because this is my first pole in Formula One, and the first for a Silver Arrow since 1955,” Rosberg told formula1.com. “it was a strange feeling because I was watching the end of Q3 from the FIA garage as we decided to save a set of option tires for the race, and I couldn’t do anything but watch! Seeing that I finished at the top of the timesheets and with half a second in hand made me the happiest man today.”

The cool temperatures, which dropped in the final session, favored the Mercedes chassis which is hard on its tires. “The temperature coming down in the end slightly helped, just helped the rear tires a little bit,” Rosberg explained on Speed-TV. “We’re depending on that also a lot for tomorrow, then how the conditions are can change things a lot for us. It’s difficult to know really how well we’re going to go tomorrow. We’ll see.”

“I’ve set my car up to be at its strongest in the race,” Hamilton said in a McLaren press release. “Although Jenson and I are a little bit further back than we’d like, and we’ve got a bit of work to do, we can still make it. There’s a good group of drivers ahead of us on the grid, but we’re right with them in terms of race pace. This is a track where you can overtake, and we’ve got DRS too—so I’m massively excited about tomorrow.”

The surprise of the session was the performance of the Red Bulls. Mark Webber qualified seventh, and Sebastian Vettel couldn’t even get into the final qualifying session; he will start from 11th place.