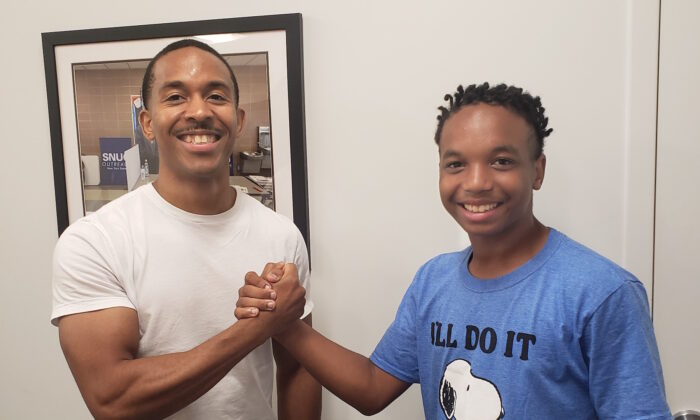 Mark B. is a lawyer in New Rochelle, a northern suburb of New York. Tysaun is a 14-year-old from nearby Mount Vernon, and is what some would describe as an “at-risk” child. In September 2021, Big Brothers Big Sisters of Westchester County matched them together, making Mark a “Big” and Tysaun a “Little.”

The charity is a youth mentoring organization that serves children who face adversity to help keep them in school and away from violence and drugs while assisting them to achieve their full potential in life. This mission is achieved through one-to-one mentoring relationships under a “Big-Little” model that matches adult volunteers with children aged 7 to 17.

A majority of these children are from single-parent households and many are from foster care.

The staff knows that making the best match is what leads to success. If a Big just loves fine art museums and a Little just loves professional wrestling, they’re not going to be a good match, so the staff does its best to ensure both have similar interests. However, a part of what they do is introduce each other to subjects that they may not have considered previously.

“Sometimes it doesn’t happen,” said Childs, who’s been with the organization for 17 years. “Sometimes we have three Littles and three Bigs, and they’re not compatible.”

It’s then that the staff reaches out to find matches for the unmatched.

At that point, the pair is asked if they would like to continue.

“The majority of the matches do. Sometimes we don’t even have to ask,” she said, “because it’s just a natural yes.”

However, on occasion, a Big or a Little will be turned down before a match is even attempted.

In the Mark–Tysaun situation, Mark was looking for ways to support his black community and Tysaun was in urgent need of a positive role model. His mother witnessed his grades decline as he became involved with negative influences in the neighborhood. The match was exactly what both of them needed.

Mark knew it would take time to build a relationship based on trust with Tysaun and didn’t want to come across as a nag regarding schoolwork, so their early, bi-weekly jaunts were often going out to eat, so they could talk.

Tysaun’s mother has expressed to the program manager that Mark is the exact person her son needed in his life and is very appreciative of what he’s done so far.

Currently, Westchester has a backlog of female Bigs, awaiting to be paired with female Littles. There are about 60 Littles on the wait-list, mostly boys.

Sometimes parents contact Big Brothers Big Sisters on their own; other times they may be referred to the charity by a social worker, a doctor, or a judge. When there’s a shortage of Littles, the organization will conduct its own outreach.

The cost of whatever activities a pair engages in is the responsibility of the Big. However, the organization stresses low-cost or no-cost activities, such as picnics, homework, and arts and crafts.

From the get-go, matches are required to establish three goals. Program managers follow up to see how far they’ve gotten in achieving them.

There have been matches that have lasted for 10 years. The chapter’s retention rate is currently 84 percent, which means pairs continue past the one-year commitment 84 percent of the time.

Nationally, about 98 percent of the Littles don’t engage in substance abuse, while 2 percent do.

“We do a lot of surveys [with the Littles],” Childs said, noting that they find “good things and sometimes not-so-good things,” such as experimenting with drugs.

The question every mother asks when she signs up her child is, “When am I going to get a Big?” Childs finds this question difficult to answer since there are so many factors in producing a match.