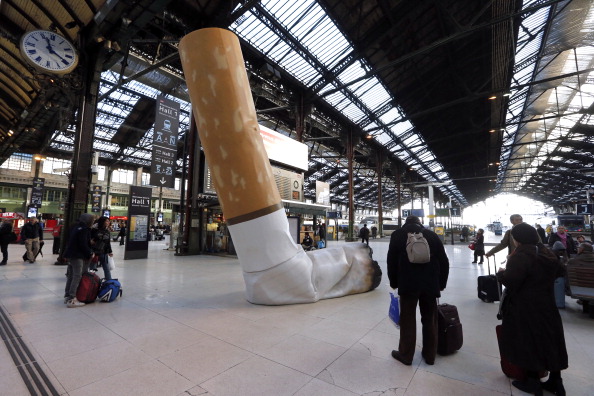 People pass by a giant mock-up discarded cigarette displayed on the ground at the Gare de Lyon railway station in Paris, on Dec. 4, 2012, as part of a public-awareness campaign. (Pierre Verdy/AFP/Getty Images)
Europe

Menthol Cigarettes and Other Flavored Tobacco Face Ban in EU

The European Union is eyeing to ban flavored tobacco—including popular menthol cigarettes—and implement health warnings that would cover 75 percent of each packet.

The European Commissioner for Health and Consumer Policy Tonio Borg cited statistics, which say that some 700,000 people die in Europe, each year due to tobacco-related problems. Around a third of the population smokes.

“More ‘attractive’ cigarette packages can now be bought and, even more worryingly, smoking has been made more attractive with the use of strong flavors, for example vanilla or strawberry,” said Borg on Wednesday in Brussels, according to a transcript. He stressed, “Tobacco should look and taste like tobacco.”

Elaborating on increasing the size of package warnings, Borg said that studies have found “large picture warnings work better than small text warnings,” and said “the legislation needs to be adapted to the latest scientific evidence,” noting that the current EU tobacco directive is more than a decade old. Twenty-five percent of the package would be left for the brand.

Current EU health warnings force tobacco companies to place an advertisement on 30 percent on one side of the packages and 40 percent on the other side. The new requirements will also apply to loose rolling tobacco.

“I want to be very clear: a tobacco product should look like a tobacco product and not like a cosmetic or candy. My aim here is that people can take an informed decision when they look at a pack of cigarettes by getting the clear message that the product they buy harms their health,” Borg said.

The proposal would also ban “slims” that are mainly targeted at women. It also said terms like “light,” “mild,” and “low tar” are misleading to consumers and should not be used in advertising or packaging.

Tobacco companies fear that more stringent EU restrictions like large warnings will dampen their sales and set a precedent for Asian and African markets.

“We trust that the hostility of some toward our industry will not blind them to the important economic, legal and societal issues that this proposed directive raises,” the firm added.