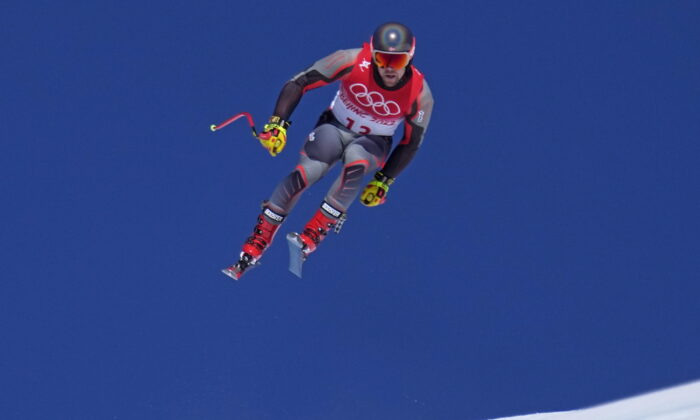 Aleksander Aamodt Kilde of Norway makes a jump during a men's downhill training run at the 2022 Winter Olympics in the Yanqing district of Beijing. on Feb. 3, 2022. (Robert F. Bukaty/AP Photo)
Beijing 2022 Olympics

BEIJING—The first day of medals at the Beijing Olympics could be the start of another Norwegian gold rush.

Aleksander Aamodt Kilde is among the favorites in the men’s downhill—one of the marquee events of NBC’s prime-time coverage Saturday—and fellow Norwegian Therese Johaug looks poised to add to the three Olympic medals she’s already won in cross-country skiing. Norway led all nations with 39 medals at Pyeongchang four years ago, including 14 golds.

The United States, of course, has its share of contenders. Snowboarder Jamie Anderson is trying for a third straight slopestyle gold, and the final is Saturday night. The team figure skating competition resumes that evening, too. The Americans lead that after a strong start by Nathan Chen and Co.

Here are some things to watch (all times Eastern):

The world’s top downhill racers had little time to familiarize themselves with the Rock course after test events were canceled because of the pandemic.

“For everybody it is new, us athletes as well as the coaches,” Switzerland’s Marco Odermatt said. “It’s a big challenge for the whole team to find a perfect setup.”

The downhill will be shown live on NBC and Peacock. It’s scheduled to start at 10 p.m.

The United States leads the powerful Russians and third-place China so far in the team competition. Chen won the men’s short program, and Madison Hubbell and Zachary Donohue did the same in the rhythm dance.

Up next are the women’s short program and men’s free skate. NBC is airing that part of the team event live in prime time.

USA Network is showing men’s and women’s slopestyle live Saturday night. The final runs of the women’s competition are followed by qualifying for the men. NBC will include encore coverage of the women’s final on its late-night slate.

The United States swept slopestyle snowboarding in 2018, with Anderson and Red Gerard both winning.

The slopestyle course in Zhangjiakou includes a snow replica of the Great Wall that serves as a backdrop for the rails and jumps athletes will navigate.

Johaug won gold in a relay in 2010 and took two more cross-country skiing medals in 2014. She missed the 2018 Games following a doping ban, but the 14-time world champion is back now. The skiathlon—an event that includes both classical and freestyle techniques—is live on USA Network on Saturday morning with encore coverage on NBC in the afternoon.

Of the 13 gold medals China has won at the Winter Games, 10 were in short track speedskating. The hosts have high hopes again in that sport, and the first short track medal will be awarded in the mixed team relay. USA Network is showing that final during its 10:30 a.m.-5 p.m. time slot, and NBC will air it in prime time. Canada’s Mikael Kingsbury is the defending champ in men’s moguls. USA Network will show qualifying and the final live Saturday morning, and the final will also be shown as part of NBC’s late-night coverage. The U.S. women’s hockey team, which began defending its Olympic title with a win over Finland, faces the Russians live on USA Network at 8:10 a.m. That game will be shown again at 5 p.m. on the same channel.