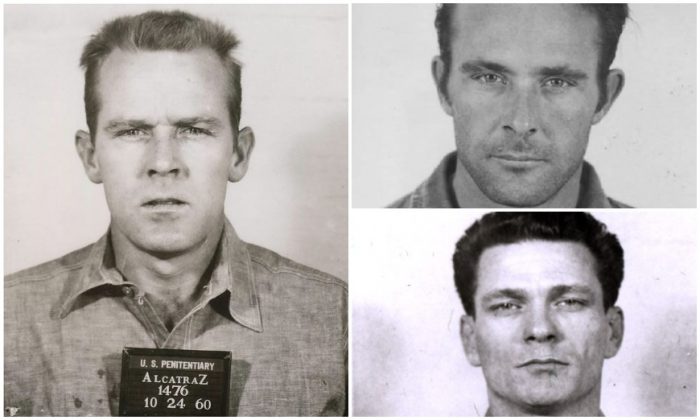 It’s a mystery that has intrigued America for more than 55 years.

What happened to the three men who escaped from America’s most secure prison, Alcatraz?

Brothers John and Clarence Anglin, along with Frank Morris escaped from the prison on the island in 1962 and were never seen again.

Their daring escape was featured in the movie “Escape From Alcatraz” that starred Clint Eastwood as Frank Morris, but the answer as to where the three men ended up has never been solved.

But now a new letter has been obtained by KPIX5, allegedly written by John Anglin, CBS San Francisco reported.

The letter seemingly sheds new light on the mystery.

“My name is John Anglin,” the letter says. “I escaped from Alcatraz in June 1962 with my brother Clarence and Frank Morris. I’m 83 years old and in bad shape. I have cancer. Yes we all made it that night but barely!”

The letter was sent to San Francisco Police in 2013 but has only now been made public.

The escape was ingenious, dangerous, and took months of planning.

On the night of June 11, 1962, the three men squeezed through vents in the rears of their cells. They used a drill made from a broken vacuum cleaner motor to widen the vents.

They had set up a secret workshop on top of their cells where they built what they needed to escape.

They then crawled through pipes to eventually make it out onto the prison roof.

To overcome the fact they were on an island, they built a raft made of more than 50 raincoats, wooden paddles, and life vests.

When guards opened their cells in the morning they found heads made of paper mache in their beds instead of the prisoners.

Most theories believe the three men would have died attempting to cross from the island to the mainland, their bodies being swept out to the Pacific Ocean.

The author says that John’s brother Clarence died in 2011 and Frank Morris in 2008.

The author writes, “If you announce on TV that I will be promised to first go to jail for no more than a year and get medical attention, I will write back to let you know exactly where I am. This is no joke…”

He goes on to say that after escaping from Alcatraz he spent many years living in Seattle, spent eight years in North Dakota, and now lives in southern California.

According to the U.S. Marshals, the FBI lab has examined the letter for its handwriting, DNA, and fingerprints, but the results have been inconclusive.

“There is absolutely no reason to believe that any of them would have changed their lifestyle and became completely law abiding citizens after this escape,” the Marshals said in a statement to KPIX5.

Author Jolene Babyak was 15 and living on the island with her warden father at the time of the escape. She has gone on to write several books about Alcatraz.

“I didn’t believe that they made it, but that’s was because of what the officers were saying,” she said to CBS.

After reading the letter, she said, “No evidence, lots of allegations, no real evidence, nothing you can follow up on.”