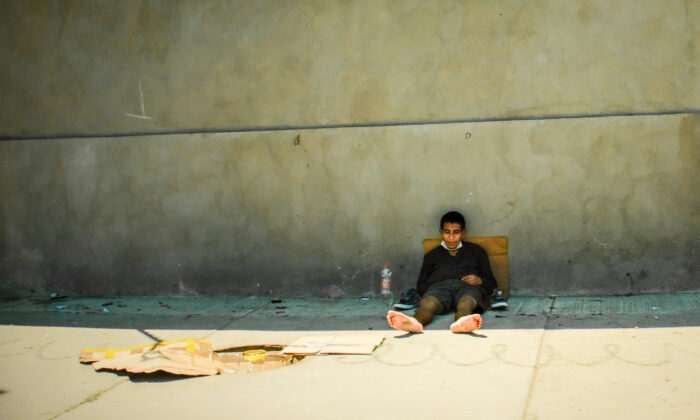 Men Trapped in Addiction Are Led to Restoration in Baja California

“They were literally shooting up gutter water on the streets of Tijuana,” Pastor Robert Lortz told The Epoch Times.

“They are people [who] are dying, and we are excited to bring them back with us if that’s a decision that they want to make.”

It’s a sunny day in the small northern Baja California town of La Misión, Mexico, where the onshore sea breeze of the Pacific Ocean picks up dust and brings some measure of coolness to the acre-and-a-half property of Rancho Libertad, where Lortz and his team provide a place for men to rehabilitate from addictions.

“But we do not call this a rehabilitation program,” Lortz said.

“It’s restoration. We provide these guys a chance to connect with the Lord if they would like to stick around here with us. We want them to rebuild their lives.”

Rancho Libertad is a privately financed residential recovery program that features bunk style housing and medical services for the many men who voluntarily check in. Many of these men are unaware of their own health issues because of intoxication from the drugs that keep the homeless on the streets of Tijuana.

“We got guys coming in that were living along the Tijuana Riverbed that have literal gangrene on their bodies. We had another guy recently that had one of his eyes almost falling out. These are souls that we start to take care of and minister to here.”

Rebirth of a Leader

Lortz, who started experimenting with drugs and alcohol at the of age 14, while growing up in Southern California, struggled with addiction and prison stints up until the age of 30. It was within the confines of a prison cell that he began his walk with God after opening a Bible and landing on the Book of Romans, Chapter 13.

“It was talking about submitting to the authorities, not being afraid, and doing what is right because of who God is. I had never even opened a Bible at that point in my life, and I begin to read that over and over.

“I know now that the Holy Spirit was saying to me that you’re not here because of the cops and not because somebody snitched on you. You’re here because you screwed up, and God is judging you for your sins for your lifestyle.

“That was enough to get my attention to where when I got out, I walked into a church for the first time in my life, and I was sober.”

Soon after leaving prison, Lortz walked into Calvary Chapel in Hemet, California, and had his first church experience.

“I don’t remember any amazing lights going off or anything like that on that day, but what I do remember is the love that a few individuals showed after taking an interest in my life.”

After attending church and Bible study the next four weeks, Lortz listened to his pastor preach about the context of heaven at a Sunday service, and he accepted the call to welcome God into his life.

“I did not know what it meant to be saved at that point and I did not even know what the gospel [was], but I knew that these people seemed happy, and I’m not going back where I just came from.”

With Lortz’s background in construction, he jumped in to help wherever he could at his church and used his skills when opportunities opened up. It was during this ministry work when a contact at church led him to serve with a rehabilitation outreach.

“He had a little program where he had five to 10 guys at a time and they lived in a couple of little mobile homes. I thought, ‘Wow, how cool is this?’”

“I wish I had a place like that we when I was down in my life!”

As Lortz continued to surround his life with the church, opportunities to serve would eventually lead him to use his skills in Haiti, the Philippines, and Mexico.

When Lortz noticed his construction business taking off, he purchased a two-and-a-half-acre property in Hemet with the goal of creating a location for Calvary Chapel ministries. Later, after the pastor of his church left the ministry, Lortz discovered a new path of leadership and was ordained as a minister.

“I was planning on going to the Philippines to go on the mission field, and have … a little house in the back while he was going to run the ministry on the property,” Lortz said.

“Well, everything changed. I ended up with an empty property that was all prepared for ministry, and I remember that my wife and I were literally in our house that we had built—empty with a bunch of different buildings, and we’re praying to the Lord on how to handle this.”

Immediately after their prayer, the couple heard a knock on their door that would shape their ministry direction.

“It turned out to be one of the guys from our outreach who was drunk and lost. He asked us for help and we said, ‘All right, man, come on in.’”

From there, more men soon followed. Lortz then understood that he was being led to serve his former self—men lost in addiction who needed hope.

While Lortz became familiar with Northern Baja on previous mission trips into Mexico, he felt encouraged to expand and build an area for men in need of addiction recovery there when a friend of his offered some land he owned in La Misión, Mexico.

Foundations were built whenever concrete came their way, and the buildings were constructed by volunteers from Calvary Chapel.

“We build with whatever was needed for each project when there was materials and the money to do it, and whenever there was a team that was willing to help.”

The first three projects were a 36-man bunk house, a cafeteria, and a chapel area. A mission house was then built for volunteer teams coming down from the United States to help with additional building projects and outreach work. A home was also built for Lortz and Eddie Yalah, a former patron of the program who is now a member of the staff at Rancho Libertad and leads worship music with his wife at the Calvary Chapel church on site.

“I started this program seven years ago, and I started with necessity,” Yalah told The Epoch Times.

“I was on the streets before this program, and that’s how I got to the Lord; I asked for help and He got me to Rancho Libertad.”

After accepting an invitation onto Rancho Libertad’s bus, Yalah notes that he felt blessed from the beginning since arriving on the property, and he shared with The Epoch Times what life in the program was like.

Mornings at Rancho Libertad start with the men reading sections of the Book of Proverbs. At noon, the men read a Bible devotion together, and at night, a pastor will preach to them from a book in the Bible.

“We get to hear about Jesus all day,” Yalah said. “That’s our program.”

Since the start of the program, La Misión’s local community has witnessed the effect of its new neighbors, even before any major building began on site. The transformation of the men who decide to stay in the program was even noted by local government officials and police officers.

“The officials and the people that are in this community know that this church and this group of people love them and want to serve them in every way,” Lortz said with a smile.