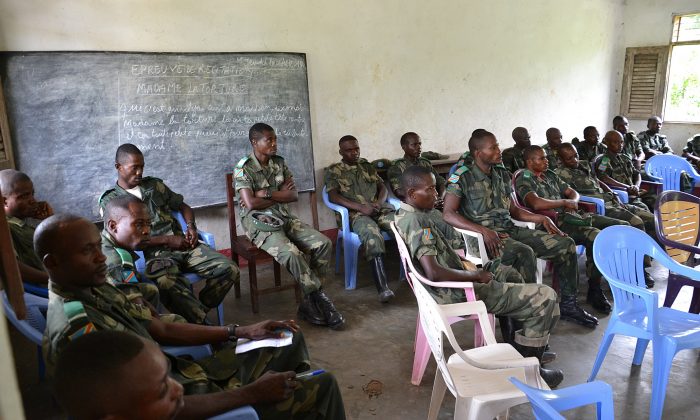 Some 30 soldiers and a few policemen attend a campaign against sexual violence, led by the UNHCR in northwestern Democratic Republic of Congo on Dec. 6, 2013. (Habibou Bangre/AFP/Getty Images)
Opinion

Men as Victims of Rape

Two male political dissidents in Egypt, Omar el-Shouekh and Fadi Samir, reported that while in police detention in Cairo they were beaten, tortured, and subjected to sexual assault. Their claim brings renewed attention to a phenomenon that is largely ignored and poorly addressed, but that causes significant damage to its victims: sexual abuse of males. New legal instruments have to be put in place to address what is a serious human rights and medical problem.

Male rape is widespread, particularly in conflict situations. Because only few men report cases of rape, statistics underrepresent the actual number of men who are sexually assaulted. In addition to Egypt, the rape of political prisoners has been reported in Chile, Greece, Iran, the Democratic Republic of Congo (DRC), El Salvador, and Sarajevo during the Bosnian conflict.

In Iran, allegations of rape and sexual abuse of both males and females in prison started to emerge after the Republic of Iran was established in 1979. In Uganda, Sudan, South Africa, and the Democratic Republic of Congo there are many personal testimonies that attest to the continuation of this practice.

At the Sexual Violence and Research Initiative (SVRI) meeting carried out in Cape Town, South Africa, in October 2011, Jocelyn Kelly of the Harvard Humanitarian Initiative at Harvard University stated that the term “sexual violence” in the DRC had become synonymous with the rape of women by armed militia. As a consequence, programs excluded male survivors of abuse and gender-base violence (GBV).

Among the psychological reactions to sexual assault that men report are feelings of shame and humiliation, loss of self-respect, anger and anxiety attacks, flashbacks of the event, depression, mood swings, and changes in sexual activity. Survivors of rape may manifest some elements of what has been called Rape-Related Post Traumatic Stress Disorder (RR-PTSD), which is considered a variety of Post Traumatic Stress Disorder (PTSD). In general, few psychotherapists are familiar with the symptoms and treatment of RR-PTSD.

Men are particularly reluctant to denounce that they were subjected to rape. When men who were raped return to their communities they—and their families—face stigmatization. A study on rape of men quotes a respondent saying, “When a man is raped, his family is also raped.” Frequently, families who have one of its male members raped lose their status in their community.

Another reason why males resist denouncing their rape is that they are afraid of being branded as homosexuals, in countries where there is strong discrimination against gay people. Moses Kamba, who was raped by soldiers in his hometown in the East of the Democratic Republic of Congo, told Al-Jazeera, “After what they did to me, I felt ashamed. It was a bad experience in my life. I left Congo when I was broken and confused. I felt I had lost my dignity, with too much pain on my body.”

Physicians and paramedical personnel must be trained on how to deal with the victims of male rape. These men need counseling and support to denounce the abuse and they need help with legal and labor matters. Addressing sexual violence both against women and men is one of the critical human rights challenges of our time.