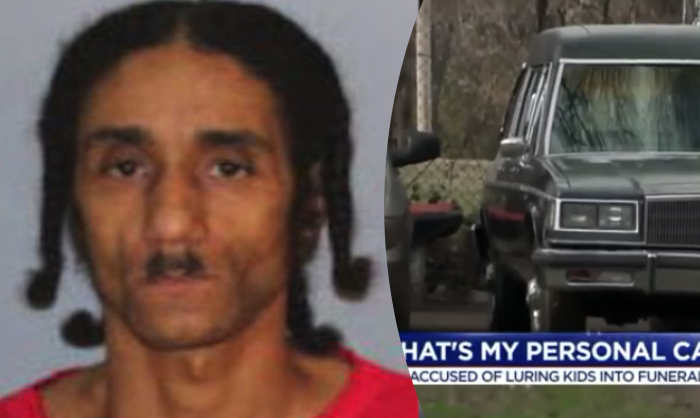 A Memphis man stands accused of luring children to a funeral hearse he was driving and touching himself in front of them.

But Jerome Powell insists he’s innocent and is going on camera to clear his name.

“I’m innocent of all these charges,” Jerome Powell told FOX13. “I ain’t running. I got nothing to hide.”

Powell was arrested on Sunday, Feb. 18, and charged with indecent exposure, FOX13 reported, citing a police source that said the man touched himself in front of multiple children.

It is reported that a woman called the police to report seeing Powell sitting in a black funeral hearse, surrounded by several children. She said that the man was performing an indecent act.

Antonio Bledsoe, a witness shown in the video speaking to WREG reporters at the Pendleton Place Apartments complex where Powell allegedly committed crude acts, said Powell also made a shocking statement to a child.

“He asked a little girl if she wanted to ride with a dead body,” Bledsoe said.

A WREG reporter confronted Powell with this accusation, asking whether he had a corpse in his hearse, which was spotted parked nearby.

“I ain’t never rode with no dead body, never had nobody in the back,” Powell insisted.

Police responding to a “criminal assault” call arrested Powell on Sunday and released him on $100 bail. He appeared in court on Tuesday morning, Fox13 reported.

Powell then went public to proclaim his innocence.

“They can say anything,” Powell told Fox13 reporters. “Folks can say what they want to say. I’m telling you the real deal. I’m innocent.”

According to WREG, Powell has a previous conviction for contributing to the delinquency of a minor.

Powell also underwent a mental evaluation in 2010, according to WREG.

“They found that I was sane. I’m not insane. I got sense enough to know what’s going on,” Powell said.

Powell is expected to make a court appearance in connection with the charges on April 24, 2018.

Meanwhile, police said that this is an ongoing investigation.