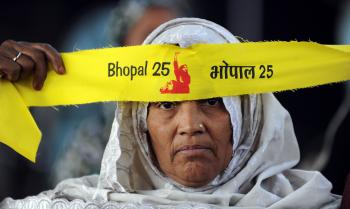 Indian activists rally in memory of the 1984 gas disaster victims on the accident's 25th anniversary in Bhopal on Dec. 3, 2009. (Indranil Mukherjee/AFP/Getty Images )
World

Although memories have faded, I can still remember the day [Dec. 3, 1984], when I heard the news of a poisonous gas leak in Bhopal from my parents. I was five years old, a boy. Telephones were not as ubiquitous those days and getting correct information was difficult for us. My parents were restless as most of our relatives were in Bhopal. Unfortunately all families were not as lucky as ours as some fell victim to the tragedy.

Twenty-five years has gone but the memories of that deadly night are still alive for residents of Bhopal. When people woke up that morning in 1984 everyone felt that something was wrong as hospitals were full of patients with similar symptoms of suffocation, a burning sensation in their eyes, and vomiting. In some areas close to the Union Carbide Plant people and animals were visibly dead on the roads. If we go by Dr. Eckerman’s figures, 8,000-plus people died within 72 hours.

After 25 years Bhopalis feel that effects of the tragedy are still visible on newborn and poor people who do not have enough access to good medical facilities. Doctors feel people still have psychological and neurological disabilities because of this tragedy.

The Union Carbide Plant still stands tall at the same location as tank 610—from which the gas leaked as a large amount of water entered the tank containing 42 tons of methyl isocynate. In the area around the plant, people can still see slogans on the walls like “Punish the guilty,” and “Shame on Warren Anderson.” Exact reasons for the leak are still unknown, with U.S.-based Union Carbide, the Indian government and the state government giving different theories about the tragedy.

Most of the Bhopal residents now feel that the plant site should be cleared for something purposeful, as they feel the site still contaminates the environment and underground water.

When asked about compensation paid later on, Mr. Rakesh who is a transportation business owner in Bhopal says in a telephone interview, “A number of hospitals were built after this tragedy and [the] government compensated people with money, I got 25,000 Indian Rupees (US$540 today) two times. For me, it does not matter, as we were far from Union Carbide Plant, but there are some families who lost their whole generation in this tragedy, which cannot be compensated with money.”

With this, his voice turns grim, “We can only hope that such big companies would learn something from this and would try to avoid any reoccurrence anywhere in the world.”

I have a strong connection with this city as this is my birthplace. I still remember the famous Hamidia hospital where I used to visit my late uncle who was a doctor by profession. This hospital is only one mile from Union Carbide Plant. Life in Bhopal (also known as the ‘City of Lakes’) goes on, but people still have pain in their hearts, which is visible when asked about the tragedy.