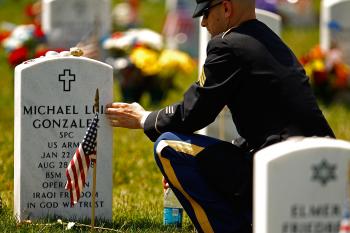 US Army Sgt. Brian Scott touches the grave marker of his friend and gunner Army Specialist Michael Luis Gonzales on Memorial Day May 31, in Arlington, Virginia. Today many Americans will pay tribute to relatives and friends who lost their lives in battles. (Chip Somodevilla/Getty Images)
US

Ian Ritz
View profile
Follow
biggersmaller
Print
On Memorial Day, Arlington National Cemetery attracted visitors from all over the nation as Americans took a day to remember fallen military service members. Memorial Day also marked the unofficial first day of summer and is the weekend for the Indy 500 every year, leading to festive outdoor cookouts. Vice President Joe Biden spoke at Arlington about the importance of honoring the men and women in uniform. Biden has a son in the military.

Many Americans will pay tribute to relatives and friends who lost their lives in battle and to surviving veterans. Cemeteries across the country were covered with American flags on the grave sites of veterans. Schools, post offices, libraries, and most businesses were be closed in honor of the holiday.

President Obama commented on the Memorial Day weekend during his weekly address Saturday. He spoke with fondness of the American holiday that inspires millions of citizens to have cookouts and family gatherings. His weekly speech is broadcast for free viewing on the White House official website.

“I hope that as you do so, you take some time to reflect on what Memorial Day is all about and why we set this time aside as a time of national remembrance. It’s fitting everyday to pay tribute to the men and women who wear the uniform in the United States of America,” said President Obama.

Vice President Joe Biden, whose son did a recent tour in Iraq, spoke about his appreciation for veterans and the importance of Memorial Day. He noted those who have lost their lives in Iraq and Afghanistan.

“We take great pride in the lives they lived and the service they provided, and the nation they created … Approximately 1,074 soldiers have died in Operation Enduring Freedom in Afghanistan and 4,391 servicemen and women died in Operation Iraqi Freedom, said Biden.

The first official Memorial Day was recorded in May of 1868, after the Civil War. The holiday was started by Commander in Chief John A. Logan "for the purpose of strewing with flowers or otherwise decorating the graves of comrades who died in defense of their country during the late rebellion, and whose bodies now lie in almost every city, village, and hamlet churchyard in the land."