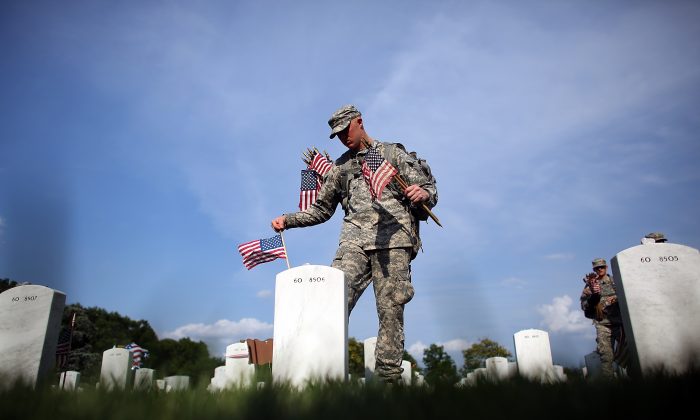 A member of the 3rd U.S. Infantry Regiment places American flags at the graves of U.S. soldiers buried in Section 60 at Arlington National Cemetery in preparation for Memorial Day in Arlington, Va., on May 24, 2012. (Win McNamee/Getty Images)
Opinion

As America honors Memorial Day, we must have burning within our souls the most profound appreciation for all who have offered the ultimate sacrifice to preserve our freedom, liberty, and way of life.

The nation must prayerfully pause during this sacred Memorial solemnity and remember the sacrifices of the fallen, as well as their widows and orphans.

For America to truly understand the dignity of Memorial Day, it is imperative to reflect on Abraham Lincoln’s profound respect for those who died for the nation.

The eloquent words of the Gettysburg Address, a speech delivered by Lincoln at the Nov. 19, 1863 dedication of Soldiers’ National Cemetery, can ignite a fire of devotion in the soul.

The soldiers’ sacrifice was sacrosanct and served America’s most noble values of liberty, equality, unity, freedom, democracy, and spirituality.

Lincoln succinctly honored, with less than 300 words, Union soldiers killed at the Battle of Gettysburg during the Civil War. His speech has been immortalized throughout the world as one of history’s most eloquent orations.

Lincoln not only honored the dead, but also reminded listeners then and throughout the ages that the soldiers’ sacrifice was sacrosanct and served America’s most noble values of liberty, equality, unity, freedom, democracy, and spirituality as exemplified in this excerpt:

Complementing Lincoln’s devotion to those who consecrated the ground at Gettysburg with their sacrifices, Lincoln’s Second Inaugural on March 4, 1865, gave a comprehensive perspective on the ultimate sacrifice.

Once again, the master of brevity with only 703 words in his speech, Lincoln spoke of the Civil War in terms of compassion, character, and the monstrous injustice of slavery.

Lincoln did not demonize the South by giving the North a victory speech, nor did he excoriate the South of the inhumanity of slavery.

Instead, he called to task the entire nation as guilty, and pleaded for reconciliation, unity, empathy, and sensitivity, which included this burning decree:

“With malice toward none, with charity for all, with firmness in the right as God gives us to see the right, let us strive on to finish the work we are in, to bind up the nation’s wounds, to care for him who shall have borne the battle and for his widow and his orphan, to do all which may achieve and cherish a just and lasting peace among ourselves and with all nations.”

Honoring a Hero, Widow, and Child

In October 2013, I came across a published work with a photo of an angelic little three-year-old boy named Michael Wyatt that put a sword through my heart. I immediately clipped the photo from the magazine and placed it in a prominent place in my home, to remind me of the gravity of his father’s sacrifice, and so that I could always remember to pray for this little boy and his mother.

Michael was born in 2010, the son of Corporate Derek Wyatt, a 25-year-old Marine killed in Afghanistan the day before Michael’s birth.

His wife, Kait, a Marine veteran, gave birth to Michael at Camp Pendleton in California, the evening after her husband was killed by a sniper while he was leading other Marines.

America must eternally honor Memorial Day with profound gratitude to all who offered the ultimate sacrifice to preserve our way of life.

Our nation must also reflect on Lincoln’s devotion to all who have consecrated America by their sacrifice, and to forever honor, assist, and support their widows and children.