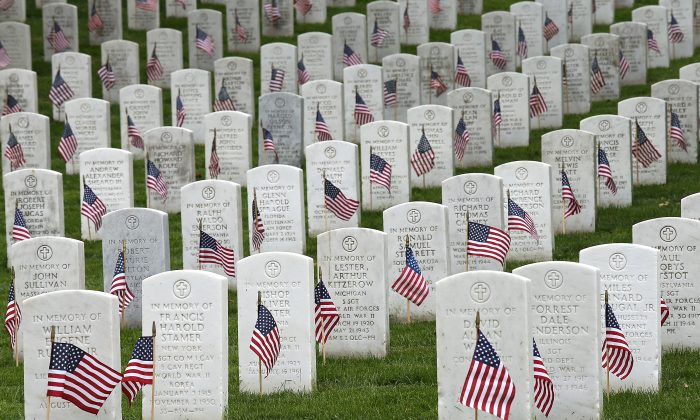 American flags at the graves of U.S. soldiers buried at Arlington National Cemetery, in preparation for Memorial Day in Arlington, Va., on May 21, 2015. (Win McNamee/Getty Images)
US

Memorial Day is Monday, and that means a number of state and federal government services are closed.

UPS, FedEx, and the U.S. Postal Service do not operate. Service resumes on Tuesday, May 31.

The DMV is also closed.

All state and local municipal offices are closed.

The post office is also closed, and mail service will also be suspended for the holiday.

The U.S. stock market is closed.

All major banks are closed for the day.

But big stores Walmart, Target, Macy’s, JC Penney, Best Buy, Home Depot, and more are expected to have some kind of deal or sale. They should be open with normal hours, but like any holiday, check ahead of time.

Costco, however, is closed.

National Parks are mostly open, but you might need to check with individual sites.

Here are the banks that are closed:

Here’s some history about Memorial Pay, according to the US Department of Veterans Affairs:

“Three years after the Civil War ended, on May 5, 1868, the head of an organization of Union veterans — the Grand Army of the Republic (GAR) — established Decoration Day as a time for the nation to decorate the graves of the war dead with flowers. Maj. Gen. John A. Logan declared that Decoration Day should be observed on May 30. It is believed that date was chosen because flowers would be in bloom all over the country.

The first large observance was held that year at Arlington National Cemetery, across the Potomac River from Washington, D.C.

The ceremonies centered around the mourning-draped veranda of the Arlington mansion, once the home of Gen. Robert E. Lee. Various Washington officials, including Gen. and Mrs. Ulysses S. Grant, presided over the ceremonies. After speeches, children from the Soldiers’ and Sailors’ Orphan Home and members of the GAR made their way through the cemetery, strewing flowers on both Union and Confederate graves, reciting prayers and singing hymns.”