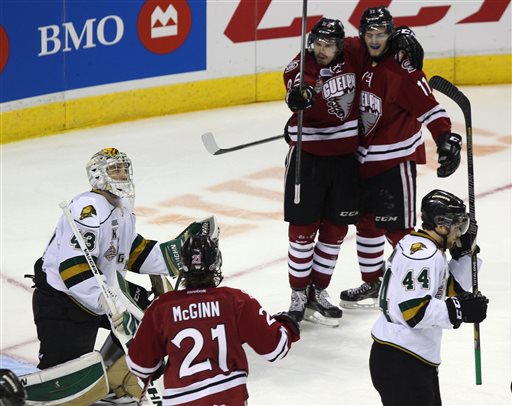 The Val-d’Or Foreurs take on the Edmonton Oil Kings on Friday night in the 2014 Memorial Cup semifinal.

The match will start at 7 p.m.

It will be broadcast on Rogers Sportsnet and TVA Sports.

Live streaming will be available via NeuLion and the NHL Network.

The match will feature a showdown between two teams that had a marathon game–double overtime–on Tuesday.

A key matchup in the game is going to be Oil Kings defenseman Griffin Reinhart vs Anthony Mantha of the Foreurs.

The pair were teammates on Canada’s junior hockey team this year and are both first-round NHL draft picks. Mantha plays for the Detroit Red Wings while Reinhart plays for the New York Islanders.

“They’ve got last change so we’ll see how much I end up playing against him,” the Oil Kings captain said. “I like the challenge. I know him a little bit from world juniors and it will be fun for both of us I think.”

Mantha didn’t score on Tuesday but assisted on the goal that pushed the game into overtime.

“To be honest with you I think Mantha played a pro game the last game,” Foreurs coach Mario Durocher said. “He was physical. Even if he didn’t score but he got some points by making passes. He was first on the puck. He was able to play the physical game.

“Reinhart is a big guy, a strong guy and I think Tony needs to use his speed. He (Mantha) battled against him so I’m happy the way he played the last game.”

The winner of the match will advance to the final on Sunday to face the Guelph Storm, which hasn’t lost.