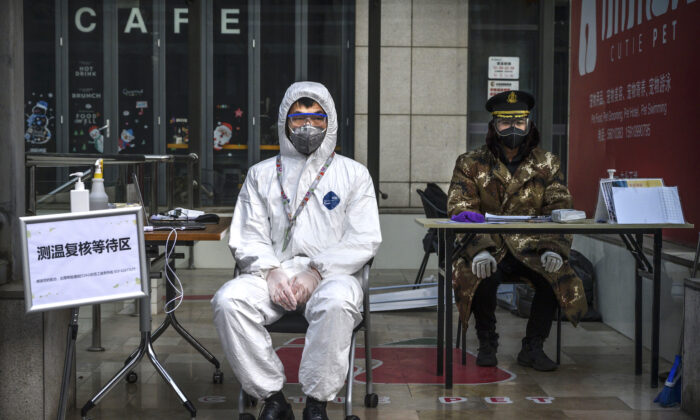 A Chinese guard wears a protective mask and suit as he waits to check temperatures and register people entering a building in a commercial area in Beijing on Feb. 21, 2020. (Kevin Frayer/Getty Images)
Thinking About China

Facing both an epidemic and economic recession, China finds itself truly stuck between a very large rock of economic recession and an exceedingly hard place of a deadly epidemic. And worse, there is no clear path out of this awful predicament.

Unfortunately, the nation of 1.3 billion remains in the midst of the escalating COVID-19 outbreak that began in mid-December of 2019. The Chinese Communist Party (CCP) did not act upon it as early as it could have, and by late January, it was too late to contain it easily.

It’s no exaggeration to say that the near future is looking pretty grim at the moment, both economically and in terms of the epidemic.

At the moment, there is no end in sight to the outbreak and no good options to stop it. Even extending the Lunar New Year holiday by two weeks had little or no effect on the spread of the pathogen. Nor did China’s massive lockdowns of entire cities—up to 70 million people, a population greater than that of Great Britain—halt the progress of the outbreak.

The COVID-19 outbreak continues to widen its reach, despite the government’s draconian efforts. The prospect of thousands more fatalities, if not tens or even hundreds of thousands, is real and grows more probable every day.

On the other hand, China’s economy is floundering. At first, President Donald Trump’s tariffs dampened output and GDP. But as of January, COVID-19 has brought much of the economy and the nation to a standstill. That has huge ramifications for China’s economic viability and social stability.

Not ‘Business as Usual’

As a result of the viral contagion and its effects, millions of workers are staying home in self-quarantine or avoiding the cities out of a very real fear of infection. Supply chains for global customers and industries are now under duress. Delays in production are by now a given, but additionally, Beijing has announced that it may not be able to meet the “phase one” trade agreement requirements. That could trigger a resumption of tariffs on Chinese products.

In an effort to rescue the economy from further decline, the CCP leadership has ordered workers to get back to their factory jobs. Without the factories up and running, of course, production suffers and revenues fall. Many companies are at risk of bankruptcy. And much-needed medicines and medical supplies, along with all the products the rest of the world relies on China to provide, don’t get made.

But Beijing’s ordering of workers to get back to the factory isn’t only callous, it’s foolish. Forcing people back into factories puts millions of workers’ lives at risk. And, doing so can only result in the further expansion of the pathogen. Prioritizing the boosting of GDP at the expense of potentially millions of lives is just one more misstep by the CCP in a series of them that led to the outbreak in the first place.

Recall that this decision was made after a number of disturbing admissions from the Chinese regime. These include the announcement that the virus is becoming stronger, that’s it’s now airborne, that reinfections are now occurring, and that there aren’t enough hospitals or medical supplies to handle the growing patient load.

Given these dire and dreary facts, does it make any sense whatsoever to increase human-to-human exposure at this time? Does it sound reasonable to compel millions of people who left the cities for rural areas to return to factories where the probability of infection is considerably higher?

The stupidity of this order is staggering. Adding more COVID-19 casualties will help China how? By producing more goods in an enclosed factory with potentially infected workers about, handling clothing, smartphones, and other items to be exported to the West? What customer will want to import goods produced by workers infected with a deadly and highly contagious disease?

Chinese authorities admit that they don’t know everything about the virus, but by latest accounts, the COVID-19 virus can live on a surface at room temperature for nine days. Measles, another highly contagious virus, can only live for two hours outside a host.

What if the COVID-19 lifespan is longer? Some coronaviruses that only infect animals can live longer than 28 days. Forcing uninfected people back into factories has catastrophe written all over it.

Not surprisingly, some workers aren’t returning to work. In response, Beijing has announced harsh punishments for those who don’t return to work as ordered. But if the workers do return, it will likely be a short-term fix to the GDP problem—if even that—and a long-term curse for millions of people.

If the CCP leadership is trying to get ahead of the virus, creating more victims is not the way to do that. If they’re trying to instill unity within the country, they’re only accomplishing the opposite. Anger at both local Party leaders and those in Beijing is growing, and rightfully so.

But the Party’s colossal hubris and bitter mistakes born from it may well serve a greater purpose in China’s long history. It may finally be the undoing of the CCP leadership and what it truly values, and—spoiler alert—it isn’t the average Chinese workers that the Party says it’s out to protect.

The CCP leadership knows that as both economic conditions and the epidemic worsen, the chances for unrest among the masses grow. The focus of their anger can only be directed at the all-powerful, all-knowing Party that has failed the country. That’s a drama the CCP would like to avoid, because they don’t think they’ll like how it will end.

It would seem that survival is top of mind for Beijing. But that concern seems to be limited to the survival of the Party. News flash to the CCP: the COVID-19 virus doesn’t care.