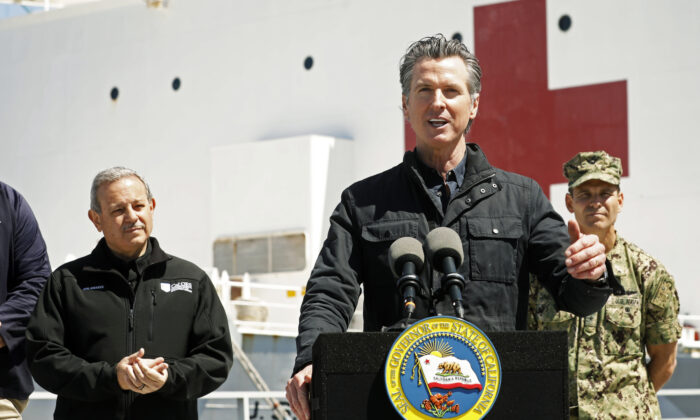 Californian Gov. Gavin Newsom speaks in front of the hospital ship USNS Mercy that arrived into the Port of Los Angeles on March 27, 2020. (Carolyn Cole-Pool/Getty Images)
By Katabella Roberts

California’s Gov. Gavin Newsom is expected to announce that he will be closing all beaches and parks across the state starting Friday in an effort to slow the spread of the CCP virus, commonly known as coronavirus.

A memo sent to California police chiefs on Wednesday said the decision was triggered following overcrowding at beaches over the weekend.

“After the well-publicized media coverage of overcrowded beaches this past weekend, in violation of Governor Newsom’s Shelter in Place Order, the Governor will be announcing tomorrow that ALL beaches and all state parks in California will be closed, effective Friday, May 1,” the memo read.

“We wanted to give all of our members a heads up about this in order to provide time for you to plan any situations you might expect as a result, knowing each community has its dynamics,” it continued, adding that the League of California Cities and California State Association of Counties had been informed of the plan.

Despite stay-at-home orders and social distancing guidelines currently in place across California, a heatwave in Southern California over the weekend drew thousands of people to beaches in Orange County and Ventura County.

Addressing images of the crowded beaches during a press conference on Monday, Newsom said this was an example of “what not to do” if the state is to make any progress toward easing restrictions.

“Those images are an example of what not to see, what not to do if we’re going to make the meaningful progress we’ve made the past couple of weeks, extend into the next number of weeks,” he said.

“The reality is that we are just a few weeks, not months, away from making measurable and meaningful changes to our stay at home order, that is a very optimistic point to emphasis, however, that’s driven by data, it’s driven by behavior, and as we change our behaviors, we can impact the science, the health and the data.

“We can’t see the images we saw, particularly on Saturday in Newport Beach and elsewhere in the state of California,” he added.

Several local officials defended the earlier decision to keep beaches open, with some insisting that beachgoers were maintaining social distancing.

In a 5-2 vote, Newport Beach City Council officials voted to keep the beaches open, while the Laguna Beach City Council, which closed its beaches last month, voted Tuesday to reopen them for “active use only” from 6 a.m. to 10 a.m. on weekdays beginning Monday.

Beachgoers are prohibited from laying out beach towels, planting umbrellas, and sunbathing but can swim, surf, or perform other physical activities.

As of Monday, California had reported more than 43,000 confirmed COVID-19 cases and 1,724 deaths, according to government data collated by Johns Hopkins University.

Newsom said this week that he won’t begin easing restrictions in California until his office sees a drop in hospitalizations for at least 14 days.