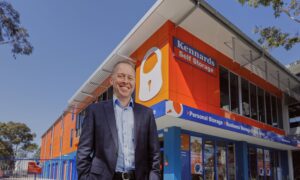 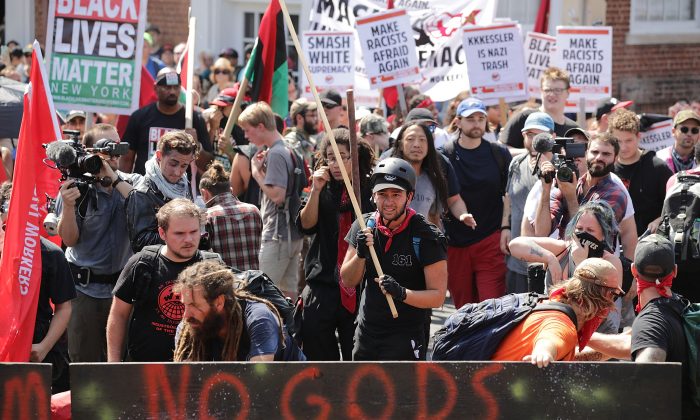 Protesters, including members of the communist extremist group Antifa, hold signs during an Aug. 12, 2017, protest in Charlottesville, Va. According to a new book, social conflicts are being used by special interest groups and governments to shape narratives and alter public perception. (Chip Somodevilla/Getty Images)
International

Russia’s Internet Research Agency was recently highlighted in charges from special counsel Robert Mueller for its operations “to interfere with elections and political processes.”

According to a new book, however, the Russian operations are just a small part of a much larger picture. Special interest groups, governments, and big businesses are trying to alter the way we perceive information in order to influence the culture and underlying values of our societies.

The book, “Information Warfare: The meme is the embryo of the narrative illusion,” by James Scott, founder of the Center for Cyber-Influence Operations Studies, explains the strategies of “memetic warfare,” and reveals the groups using this system to advance their agendas.

A meme is an idea that can “evolve” over time, and eventually influence culture. Memes are often associated with funny pictures overlaid with text. Yet the concept goes much deeper, and can be anything from music, to movies, to words and their perceived meanings.

Memetic warfare is a weaponized use of memes to intentionally introduce ideas into society, packaged in a way that allows them to spread, with a goal to alter the culture and perceptions of a targeted population.

A goal of memetic warfare isn’t to alter reality, but instead to alter the perceived reality.

According to the book, “the most profound weapon a nation or special interest group can possess is ‘control’ over information. This contributes to control over the narrative, and the meme is the embryo of the narrative.”

Censorship is about what you don’t see, rather than what you do see. Digital gatekeepers provide users with only the content that they want them to view.
— From the book ‘Information Warfare’ by James Scott

Other entities play a role in helping shape the ideas and control people’s exposure to ideas that don’t fit the objective.

“Corporate nation state propagandists, such as Google, Twitter, YouTube, and Facebook, perpetuate the syntactical amalgamation of censored ideas, narrative illusions, and perception steering initiatives that cripples and imprisons the mind,” it states.

It adds, “Censorship is about what you don’t see, rather than what you do see. Digital gatekeepers provide users with only the content that they want them to view.”

The nature of warfare has changed. As the book notes, war has moved beyond merely killing an enemy or capturing and holding territory. The war of messages has taken over, and “The emerging hybrid war depends on the allegiance of civilian populations and control over narrative.”

The book poses a question. It cites French philosopher René Descartes, stating, “I think, therefore I am,” and adds, “but who does one become when the thought is hijacked?”

It raises the issue that as political organizations, social networking companies, legacy news outlets, and other powerful groups work together to manufacture ideas intended to alter the perceptions of a country, how can people recognize what thoughts are their own and which thoughts have been planted?

In today’s world, “Information Warfare” states, websites like Facebook are nearly as relevant as the United Nations, information-leaking website WikiLeaks has intelligence analysts similar to the CIA, and “Google’s dragnet surveillance censorship algorithm has become the new gatekeeper of critical information that could lead society into a new renaissance.”

A shift in power has taken place, moving to “an all-out battle for the psychological core of the global population.”

“Digitized influence operations have become the new norm for controlling the electoral process, public opinion, and narrative,” the book states. “The cyber war has moved beyond the battlefield into an all-encompassing struggle in economics, politics, and culture, along with old-school physical confrontation.”

Among its examples, “Information Warfare” notes that some violent protests are being used by special interest groups to advance key narratives. For instance, the communist extremist group Antifa, known for its black-clad, masked followers, label nearly all conservatives as “fascists” and often escalate conflicts into violence.

“In reality, the overwhelming majority of protestors and counter-protestors are non-violent; however, they and, in most cases, the points of their causes do not merit media attention because relatively minuscule radical factions can easily steal the spotlight,” the book states.

In some cases, the true intention of the “revolutionaries” isn’t just to protest, but instead to “derail an event or detract from a cause by altering public perception and polarizing issues based on partisan politics.”

Due to the fact that Antifa members wear masks, anyone can infiltrate the group to escalate conflicts, which can then be used by legacy news outlets and political groups to frame new narratives.

This is a common phenomenon, the book states, noting “false flag operations and operations sponsored by special interest groups are both effective and prevalent in this space.”

The term “meme” was coined by militant atheist Richard Dawkins, who compared the spread of ideas and their effects on society to a “virus.”

The concept far predates Dawkins, however, and ties to broader systems of propaganda and psychological warfare—a method of warfare designed to alter the way a target interprets information.

Propagandists, such as those under communist dictatorships, will try to control a society’s exposure to ideas through censorship, while also feeding select ideas through state media and other channels—similar to the methods used by today’s information gatekeepers.

A disinformation campaign can take the form of false-flag operations, such as manufactured events or protests, or fake scientific studies and research papers. The disinformation can then be pushed by news outlets or through other channels to help shape a narrative. The rule is that disinformation needs a grain of truth, which the propagandist can point to in order to derail critics during a debate.

Another use of disinformation is to cite otherwise true information, but to manufacture a false conclusion, using the propagandist concept of “one plus one equals three.” This can include citing a series of half-truths, then claiming the evidence adds up to something it does not. Debunking this method requires a dissenter to debunk each piece of evidence, which can rarely be done quickly enough for public debate.

These tools are still in heavy use. As the book notes, psychological warfare is part of the Chinese military’s “three warfares” system, which also includes “legal warfare” to manipulate courts, and “media warfare” to control news and social media coverage.

The overall picture is that numerous groups, both public and private, are using memetic warfare to attack the perceptions of individual people. Some are interested in advancing their political agendas, others are working to destabilize the United States.

The book states, “nations must decide how to best defend their people against foreign influence operations while launching their own campaigns against emerging adversaries in the hyper-dynamic, ill-defined battlefield for control of the meme, control of the narrative, and control of perceived reality.”