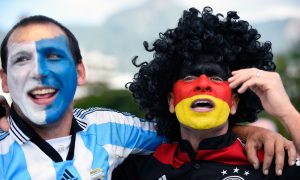 Brazil provided us a month of the once-every-four-year showcase of some of the best soccer in the world.

Though Germany capped off the event with a brilliant 1-0 victory over Argentina, it is just starting to hit fans that it’s really over.

And when you turn on the TV, there will be no more screaming fans; no more goal craziness; no more excitement.

The World Cup is over but I’m still here like: pic.twitter.com/Nzj1QXCone

The last fan in the stadium.

Who knows, four years can probably pass by really fast with some good tea.

Looking for something to do now that the World Cup is over….

World Cup Fever is over! pic.twitter.com/ylJkqVzGg7

The dream is over:(

From bad to worse to the FIFA ’15 difficulty settings for #bra. A rough week for Brazil: http://t.co/7RaqY6XvyF pic.twitter.com/QBgyH44VFk

One last knock at Brazil’s implosion toward the end of the World Cup.