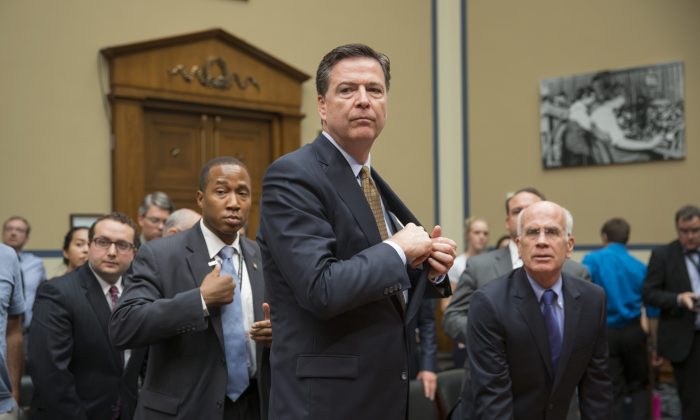 NEW YORK—FBI Director James Comey, already criticized over his handling of Hillary Clinton’s email investigation in the final days of the presidential campaign, was accepting a lifetime achievement award Monday night at a dinner organized by a law enforcement support group whose board includes three people with longtime ties to Donald Trump.

Comey was being honored by the nonprofit Federal Drug Agents Foundation. It lists more than three dozen board directors on its website, and three of its members have extensive ties to Trump. Among them: the CEO of the company that publishes The National Enquirer, the developer of a Trump-branded tower in Toronto and a convicted felon whose company rates Trump businesses for luxury.

Foundation representatives did not immediately respond to phone and email messages from The Associated Press.

Among the Trump-connected board members is David Pecker, a friend of Trump’s and the chief executive of American Media Inc., publisher of The National Enquirer.

During the course of the presidential primary campaign, the Enquirer was a regular source of attacks on Trump political rivals, including Jeb Bush, Ben Carson and Ted Cruz. The Wall Street Journal reported last week the magazine paid $150,000 to a former Playboy playmate for her story about having an affair with Trump shortly after he married his third wife, Melania Trump, but never ran it.

Pecker didn’t immediately return messages the AP left with his assistant and a spokesman.

Another board member listed for the group is Alex Schnaider, a billionaire Ukrainian-born commodities trader who built a Trump-branded hotel and condo tower in Toronto which is now in receivership.

“This is one of countless charities that he supports,” said David Zucker, a lawyer in Toronto who represents Schnaider. “He doesn’t actively participate, and he had no idea there was any dinner tonight.”

A third board member is Joseph Cinque, also known as “Joey No Socks,” a convicted felon whose American Academy of Hospitality Sciences has awarded more than a dozen Trump businesses with shiny plaques called “Star Diamond” awards. Cinque didn’t immediately return a request for comment, but a secretary at his business said he was planning on attending the Monday evening ceremony. Trump told the AP in May he didn’t know Cinque well and was unaware of his criminal history for art fencing.

The FBI director announced Sunday he would not recommend charging Clinton criminally after reviewing emails discovered on the computer of former congressman Anthony Weiner, the estranged husband of top Clinton aide Huma Abedin.

But Comey’s Oct. 28 decision to advise Congress of the newly discovered emails in the first place, before their contents had been reviewed by agents, elicited criticism by former law enforcement officials and others who questioned his judgment to make public details of an ongoing probe in the midst of a presidential election.

The foundation, headquartered on Long Island, funds scholarships and grants to the families of federal agents who have been killed or injured in the line of duty and took in about $122,000 in revenue according to a 2014 tax filing.