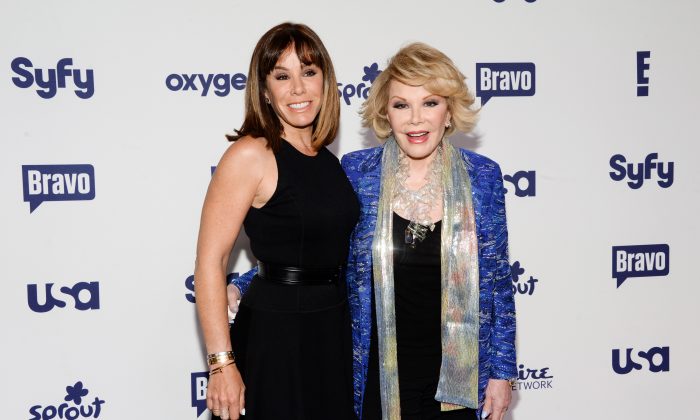 Melissa Rivers, left, and Joan Rivers attend the NBCUniversal Cable Entertainment 2014 Upfront at the Javits Center on Thursday, May 15, 2014, in New York. (Photo by Evan Agostini/Invision/AP)
US

Melissa Rivers is the only child of Joan Rivers. Her father was Rivers’ second husband Edgar Rosenberg.

Melissa attended the University of Pennsylvania. She was a student when her father Edgar Rosenberg was found dead in a hotel room in Philadelphia in 1987. She studied European History and got a degree.

Melissa later got into the entertainment business herself, becoming a producer and an actress. Her 10 credits as actress on IMDB include appearances on Beverly Hills, 90210 and Cubed.

She was also an executive producer on Joan & Melissa: Joan Knows Best? and Fashion Police, in addition to In Bed With Joan. She appeared on 34 episodes of the Joan & Melissa show from 2011 through 2014 and has also appeared on a number of shows as herself, including Couples Therapy, Celebrity Wife Swap, and The Chew.

Melissa was married to John Endicott from 1998 through 2003, and they had a son Cooper, who is often on the Joan & Melissa show.

Melissa has talked about her son lots of times, telling the Daily Mail in 2011: “My son Cooper has just turned ten and the sarcasm fairy has already started to take up residence inside his body. Not only am I living with my mother – again! – but I’ve also got her mini-me to contend with.”

She said Edgar’s suicide still has a deep effect on her. “It hits me when I look at Cooper, because Dad’s not around to enjoy his grandson. Cooper knows my dad isn’t here, and one day I’ll talk to him about it, but there’s no need for a ten-year-old to know about these things.”

OK Magazine told her that Cooper “might be the most normal child on reality TV.”

Her former boyfriend Jason Zimmerman and his scandal also played out on the reality show, exposing that Jason was seeking out sexual partners online.

Melissa has an estimated net worth of $8 million.