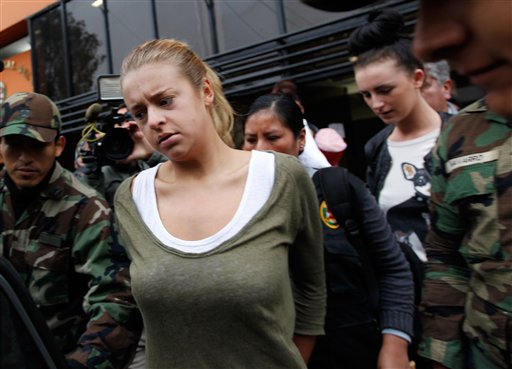 Melissa Reid and Michaella McCollum Connolly both pleaded guilty and admitted to trafficking dozens of pounds of cocaine out of Peru.

The two entered the plea on Tuesday, reported the Daily Mirror. McCollum Connolly is from Ireland and Reid is from Scotland.

They were caught at the Lima international airport in August.

The both protested their innocence for several weeks, saying they were threatened by a drug cartel to carry out the smuggling operation.

Their plea came after they came to a deal with Peruvian officials.

The case’s prosecutor says that if they plead guilty, 20-year-old McCollum and 19-year-old Reid face a minimum of six years and eight months in prison with no eligibility for parole.

According to Peru’s national prisons institute, 90 percent of the 1,648 foreigners in the country’s prisons are either sentenced or awaiting trial for drug trafficking.

The women were arrested attempting to board a flight to Madrid with the cocaine hidden in packages of mayonnaise.