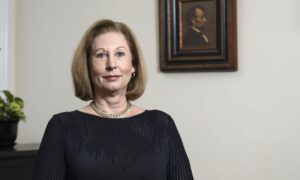 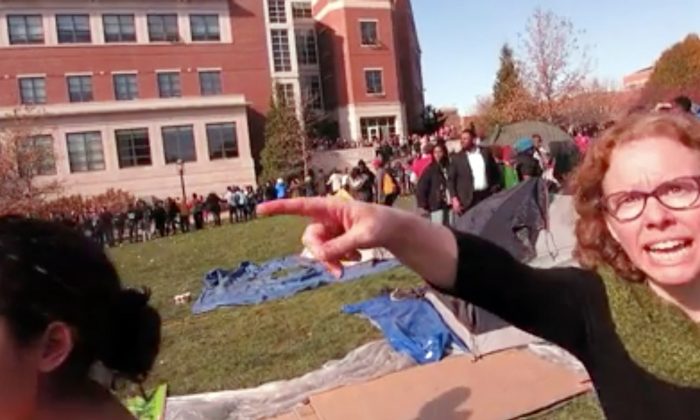 FILE - This Nov. 9, 2015 file frame grab provided by Mark Schierbecker shows Melissa Click, right, an assistant professor in the University of Missouri's communications, during a run-in with student journalists at a campus protest that followed the resignations of the university system's president and the Columbia campus' chancellor in Columbia, Mo. Click, who confronted a student photographer and another student videographer during the protests and called for 'muscle' to remove them, was charged with misdemeanor assault on Monday, Jan. 25, 2106. (Mark Schierbecker via AP, File) MANDATORY CREDIT
Politics

KANSAS CITY, Mo.—The University of Missouri on Thursday fired an assistant professor who had been suspended after run-ins with student journalists during protests last year, including a videotaped confrontation where she called for “some muscle” to remove a videographer from the Columbia campus.

Melissa Click’s actions were “not compatible with university policies and did not meet expectations for a university faculty member,” Pam Henrickson, chairwoman of the university system’s governing board of curators, said during a conference call with other top administrators. Henrickson said Click’s conduct demanded “serious action.”

More than 100 state lawmakers had called for the dismissal of the 45-year-old assistant communications professor, who last October also was recorded telling police to get their hands off students during a protest, then hugging the students and cursing at an officer who grabbed her.

Click, who was suspended last month, has said she regretted her actions. A message left Thursday with her St. Louis attorney wasn’t returned, and her home telephone has been disconnected.

But in a document released Thursday by curators, Click insisted her actions were to try to keep black protesters “safe from retaliation.” She said the widely circulated video clips of her at protests didn’t reflect the “tense” atmosphere.

“While some would judge me by a short portion of videotape, I do not think that this is a fair way to evaluate these events,” she wrote, adding that those moments “deserve to be understood in a wider frame of reference.”

Henrickson said lawmakers’ outrage had no bearing on the curators’ 4-2 vote to dismiss Click during a closed meeting Wednesday night. Henrickson, who along with fellow curator John Phillips cast a dissenting vote, declined to discuss her rationale, saying that she supports the board’s action.

She said Click would receive no parting severance package. Click has until March 4 to appeal the decision.

According to documents released Thursday by the curators, Click was represented by an attorney both times she was questioned by university-hired investigators.

A video clip that went viral showed Click calling for “some muscle” to remove a student videographer during protests on Nov. 9 that were spurred by what activists said was administrators’ indifference to racial issues on campus. The Columbia chancellor and system president resigned after the protests escalated, with one student’s hunger strike and an announcement by members of the football team that they would refuse to play.

Click later was charged with misdemeanor assault. A Columbia prosecutor ultimately agreed to drop the case if Click completed community service, but the case prompted curators to order an investigation of her by its general counsel.

More recently, police body camera footage was released from the October homecoming parade that shows Click’s confrontation with police after demonstrators blocked the vehicle of Tim Wolfe, at the time the university system’s president.

The video shows Click telling police to “get your hands off the children” and cursing at an officer who grabbed her shoulder. As Columbia police pushed protesters onto the sidewalk, Click hugged students and spoke with them before stepping between an officer and a student.

Hank Foley, the Columbia campus’ interim chancellor, said Thursday that Click’s firing was “in the best interest” of the school and a cautionary lesson about behavior that can easily be caught on cellphone video. Earlier this month, he said the homecoming parade footage showed a pattern of misconduct.

Associate law professor Ben Trachtenberg, who heads the campus’ Faculty Council, said Click’s firing was “a very unfortunate and self-inflicted wound on the university,” largely because curators decided Click’s fate rather than allowing the school use its normal, on-campus procedures for reacting to faculty misconduct.