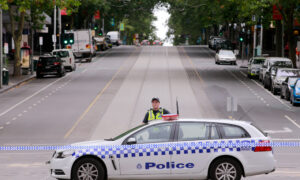 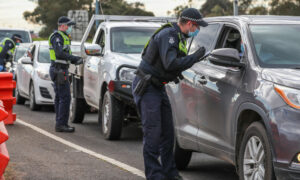 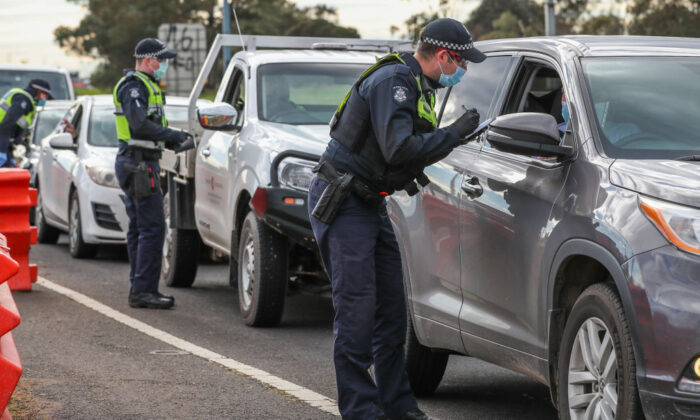 Melbourne’s “ring of steel” is ramping up traffic delays, with a long line of vehicles on the road to Geelong.

Channel Nine had helicopter footage of the long queue at the Little River checkpoint which is said to stretch back for 20km.

On Sept 17, police Assistant Commissioner Rick Nugent said the aim would be to keep delays at checkpoints to 30 minutes.

Melburnians risk a fine of nearly $5000 if they try to travel to regional Victoria without a valid reason.

There was no word from the Department of Health and Human Services on the key Friday coronavirus statistics, with the latest death and new case figures usually released before 9am.

Meanwhile, Premier Daniel Andrews faces fresh questions over claims from the state’s former top cop that his office “set up” the deal to use private security guards in its botched hotel quarantine scheme.

The exchange revealed the Department of Premier and Cabinet may have played a role in the fateful decision to use private security guards.

In his written statement, Ashton wasn’t sure whose idea it was to use private security guards but said it was not his.

He suggests it was Department of Premier and Cabinet secretary Chris Eccles who made the recommendation about 1.20pm on March 27, just minutes before his text message exchange with Kershaw.

The premier has been reticent to comment on aspects of the ongoing inquiry but has previously said there was no explicit offer for the ADF to guard the hotels.

Andrews is scheduled to appear before the inquiry next Wednesday, although he will likely be questioned about the claim at his daily media briefing on Friday.

“Mistakes have been made in relation to this program. The community’s entitled to answers,”  Andrews said in parliament on Thursday.

The explosive evidence comes as health authorities attempt to mop up a coronavirus cluster in southeast Melbourne described as a “super-spreading event”.

As the state recorded eight more deaths and 28 new cases on Thursday, Victoria’s deputy chief health officer Allen Cheng revealed five of the infections were linked to a community outbreak in Casey.

Three pop-up testing clinics have been set up in the area as authorities work with Monash Health, local council and community leaders.

The latest fatalities took the state’s death toll to 745 and the national figure to 832.