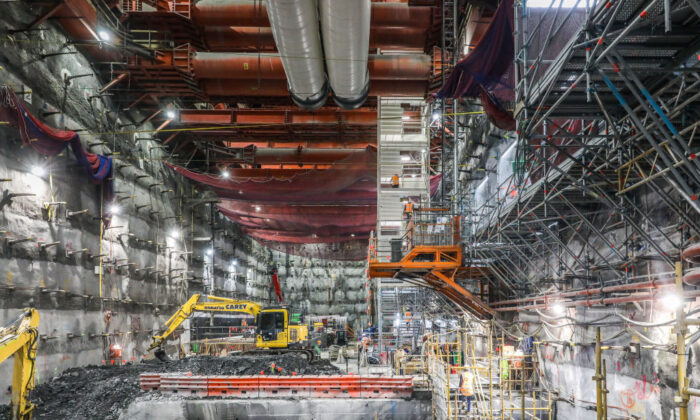 Victorian taxpayers may have to bear additional costs for Melbourne’s Metro Tunnel as the project has mostly used up its risk contingency funds.

A Victorian Auditor-General’s Office report stated that the project was expected to overspend on tunnels and stations by $364 million (US$252 million).

It also found that the Victorian government had tried to offset the overspends by descoping some project components and internally reallocating the funds.

The project is about three years away from its completion date of 2025, but Rail Projects Victoria (RPV)–a government agency responsible for managing major rail projects in the state–has spent or allocated 98 percent of the tunnel’s $740 million risk contingency funds, citing “a sequence of unplanned costs and unexpected risk events.”

The audit noted that the lack of further contingency funds posed a considerable budget risk to the RPV, given the complex and risky works involved.

In addition, the audit said the RPV told the Victorian government in May that additional funding would be needed to deliver the full scope of the project and settle potential contingency costs in the two financial years after 2023. However, the agency had not requested the extra funds.

As cost overruns have emerged, the Victorian government has consented to a recommendation to review the project’s budget and determine the additional funding it might require.

One of the changes involved the slash of 27 kilometres of a high-capacity signalling system, or one-third of the initial coverage, to reallocate $91 million to other areas.

In another instance, the Victorian government approved the descoping of several “wider network enhancements” to free up $236 million for various overspent areas.

The estimated cost of the tunnel amounts to $12.36 billion, but it does not include $182 million in extra operational expenditures and another $41 million in COVID-19 claims.

“This is a project that remains facing some challenges on cost,” she said.

“You can’t just set aside COVID. This is something we’re faced with (and) New South Wales reported on these matters just yesterday.”

“Labor has shown time and time again that it can’t manage major projects, and it is sending our state broke,” he said.

Apart from financial issues, the audit said the tunnel project could cause damage to medical and scientific equipment near two of its stations due to electromagnetic interference caused by trains.

The Victorian Department of Transport and Rail Projects Victoria has agreed to carry out risk mitigation plans before train testing starts in June 2023.

The construction of the Metro Tunnel is expected to be finalised by 2025, one year earlier than scheduled.