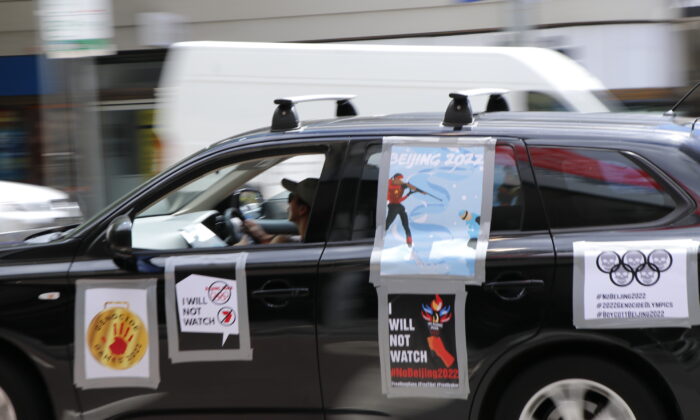 A car participating in the car parade to boycott the Beijing Olympic Games, blue poster on the car was designed by Chinese artist Badiucao, Melbourne, Australia, Feb. 4, 2022 (The Epoch Times)
Australia

Around 20 vehicles took to the metropolitan Melbourne streets for a car parade to boycott the 2022 Beijing Winter Olympic Games in the Australian state of Victoria on Feb. 4 just hours before the opening ceremony kicked off.

The protest was led by the Uyghur Association of Victoria but included activists from the Tibetan community, Australian Hong-Kong Link, as well as activists for Mainland China and Hong Kong.

The parade rolled out at 12 p.m. local time in the metropolitan regions of Melbourne, beginning at Chapel Street and finishing near the Channel 7 building by the Docklands. Channel 7 is the only major television station in Australia that streams the 2022 Games.

Frank Jie Ruan, editor of the Tiananmen Times, told The Epoch Times the event had been planned for more a month and was originally intended as a rally, but was changed to a car parade to be more COVID-safe.

Ruan said that apart from Melbourne, protests were planned in all major Australian cities during the Games, in the form of rallies, car parades, and photo displays to highlight the Chinese regime’s human rights atrocities.

Participants of the car parade displayed banners that read “No Beijing 2022” and “No Rights. No Games” stuck to the rear and front of their cars. Some cars were decorated with blue backgrounds designed by the Chinese artist, Badiucao.

Ruan said the Beijing did not deserve the host the 2022 Winter Olympics because the ruling Chinese Communist Party (CCP) was a complete “contradiction” of the Games ‘values.

The CCP has come under global scrutiny in recent years for the national security law it imposed on the formerly autonomous Hong Kong, the Uyghur genocide and slave labour practices, and its persecution of Falun Dafa practitioners.

Ruan argued that the CCP is “anti-democratic” and “tramples on its citizen’s dignity,” which don’t align with the Olympic Movement’s values of friendship and respect.

“The CCP does not give its people freedom, nor dignity, tramples on human rights, then this shows that what the CCP does opposes the spirit of the Olympic Games,” he said.

Damien, who was part of a “community of people who are victims of CCP” since they were children, said that the protest was “recognising that you can’t do a sporting event [like the Olympics] and ignore the atrocities done by the host.”

He said that when he was around nine years of age, he was educated about the holocaust in Nazi Germany and told himself then that should it happen again, he would have to “make a statement.”

The 2022 Beijing Winter Olympics, hosted in a country with such a poor human rights record, has prompted him to do that now. He said he now finds himself “in the position where it’s happening again; that there’s so much oppression by CCP.”

Damien wants people to understand that there have been many “victims” of the CCP’s “crimes against humanity.”

Although Damien is not protesting the athletes for their participation, he said he found it “disappointing” that the International Olympic Committee would think it was “acceptable to do business with the CCP.”

The protests around Australia come after Australian Prime Minister Scott Morrison on Dec. 8, 2021, joined a diplomatic boycott of the Beijing Games along with the Britain, the United States, and Canada.

The spokesperson for the Minister of Sport stated in an email to the Epoch Times that Richard Colbeck is “deeply concerned by human rights abuses against the Uyghur people in Xinjiang province.”

“We are also concerned about the erosion of democracy in Hong Kong, China’s use of arbitrary detention, the serious issues raised by the case of tennis player Peng Shuai and a number of aspects of China’s behaviour towards its neighbours,” said Colbeck.