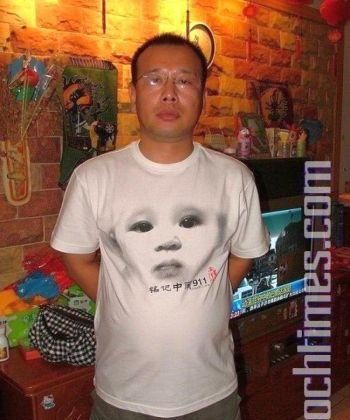 Liang Xin
View profile
Follow
biggersmaller
Print
Victims of melanine-tainted milk powder suffered a setback when the trial of the founder of ”Kidney Stone Babies” was canceled with no new date set.

Zhao Lianhai founded the group which advocates for the rights of victims of melanine-tainted products. His own child developed kidney stones after consuming melamine-tainted milk powder.

Because of Zhao’s proactive involvement in assisting victims, he was charged with the crime of “provoking an incident” last November. His hearing had been set for March 17.

The cancellation notice came through a phone call from the clerk of the Beijing Daxing District Court to Zhao’s lawyer, Peng Jiang, and was said to be due to a conflict with the judge’s training schedule.

At first Li Xuemei, Zhao’s wife, was perplexed, but she concluded that it must have something to do with the convening of the National People’s Congress and the People’s Political Consultative Conference (the “two sessions”) which conflicted with the hearing date.

She concluded that the regime may fear other tainted-milk powder victims’ families would appeal in Beijing around that time to rally and show support on Zhao’s behalf.

She said, “There will be no public hearing. I don’t know what they are hiding. Maybe they don’t want bystanders.”

Mrs. Zhao has not seen her husband for nearly four months. Her hope was that she would be given permission to see him after the trial, but now the chances for that are slim.

Toxic amounts of melamine, an industrial chemical, were discovered in milk powder in products from various Chinese manufacturers in September of 2008.

At least 12,892 infants were hospitalized—80 percent of them under the age of two. Over 100 became critically ill, and at least four have died .

After the incident was exposed, Mr. Zhao created the Web site, “Homesite for Kidney Stone Babies” where victims’ families could conduct discussions and network together.

He also helped parents file lawsuits and campaigned for regular health checks for those affected.

His actions provoked the Chinese regime and ultimately led to his arrest on Nov. 13, 2009 .

According to Amnesty International, when Daxing District police accused Zhao of "provoking an incident" (Criminal Law article 293), they claimed that he had “maliciously created hype” through using the tainted-milk powder scandal and the case of the rape of Li Ruirui, an appealing petitioner who was raped by a security guard while under house arrest.

As a reason for disallowing a public trial, the court cited protection of personal privacy associated with the rape case of Li Ruirui.

Attorney Peng said the cases are unrelated. He disagreed with the court’s decision to not hold a public hearing.

He said that “maliciously creating hype” is not a legal term. Even for “provoking an incident” to constitute a crime, there must be several major factors, such as an outcome with damaging consequences, deliberate actions of provocation, and subjective intent to commit a crime.

Zhao’s attorney also said that there is no evidence that actions of Zhao resulted in the adverse consequence of seriously damaging social order. He asserts that Zhao’s actions should not be subjected to criminal investigation and prosecution.