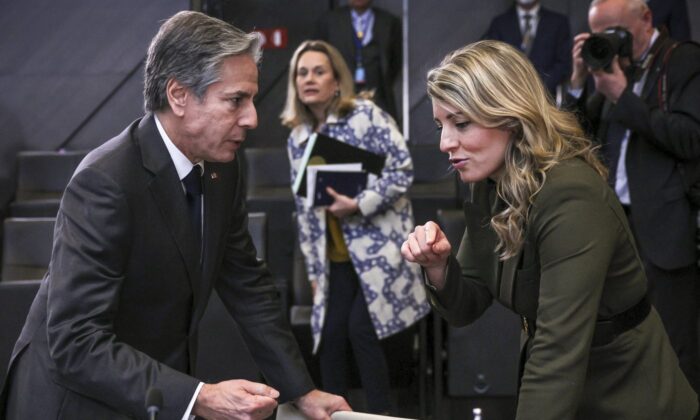 Ukraine’s war with Russia will be top of mind Tuesday when Foreign Affairs Minister Mélanie Joly meets by video link with her U.S. counterpart.

Joly and U.S. Secretary of State Antony Blinken will discuss the ongoing multilateral effort to push back against Russian President Vladimir Putin.

Blinken says the global effort to support Ukraine—involving more than 30 countries, including Canada—is showing “real results,” which is more than can be said for Putin.

He says Russia is failing in its effort to rob Ukraine of its sovereignty.

Later this week, Defence Minister Anita Anand will be in D.C. for her own set of in-person meetings with Austin at the Pentagon.

Anand and Austin are expected to address support for Ukraine, as well as modernizing Norad. Updating the bilateral aerospace defence system has taken on new urgency given Putin’s invasion.

Those include “our support to Ukraine, co-operation with NATO allies and the global impacts of Russia’s invasion of Ukraine.”