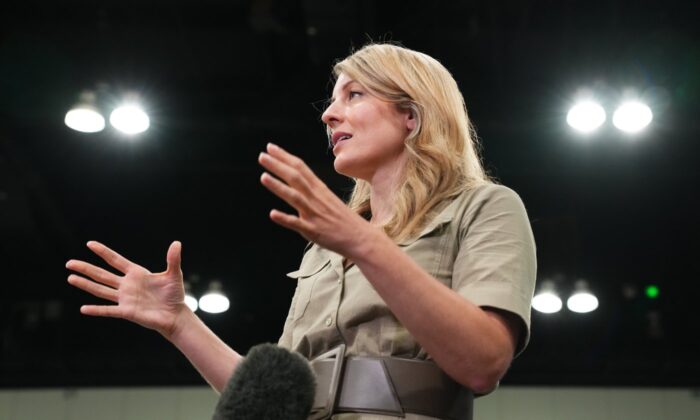 Melanie Joly speaks with members of the media at the Summit of the Americas, in Los Angeles, June 10, 2022. (The Canadian Press/Sean Kilpatrick)
Canada

Foreign Affairs Minister Mélanie Joly is proposing the National Security and Intelligence Committee of Parliamentarians study allegations that Canada did not heed warnings about the safety of its Ukraine embassy’s locally engaged staff ahead of the Russian invasion.

Joly raised the possibility of the study while appearing at the House of Commons foreign affairs committee today, where MPs were focused on Canada’s decision to return a turbine for a Russian state-owned pipeline that supplies natural gas to Germany.

The Globe and Mail reported this week that in the lead-up to Russia’s invasion of Ukraine, Global Affairs Canada received Five Eyes intelligence that said Ukrainians working for western embassies were likely to be on lists of people Moscow intended to hunt down.

Citing three unnamed diplomatic sources described as having direct knowledge of the situation, the newspaper reported that the department instructed embassy leaders in Kyiv to withhold the information from Ukrainian employees—even as the Canadians were recalled to Ottawa.

Joly told MPs on the committee that she, her political staff and the department did not have information about “kill lists” specifically targeting Canadian diplomats and locally engaged staff.

She says she will make herself available to the national security committee, which consists of senators and MPs with top security clearances, if they decide to take up the issue.

The Canadian Press has not independently verified the report.

Joly also told MPs that Canada had been “preoccupied” by intelligence the United States made public earlier this year that said Russia planned to target specific Ukrainians during an invasion.

In February, days before Russia began its assault on Ukraine, media reported that the U.S. government had “credible information” about the threats and had warned the United Nations human rights chief.

“It’s very important that we get to the bottom of the situation,” Joly said as she and Conservative MP Garnett Genuis spoke over each other during a heated exchange on Thursday.

“This is something that I take very seriously.”

Later Thursday, Joly posted a statement to Twitter that reasserted the national security committee would have “my full support and co-operation” if they study the matter.

It said locally engaged staff in Ukraine “were kept informed of the evolving security situation as they made decisions to keep their family safe” and about immigration paths to Canada.