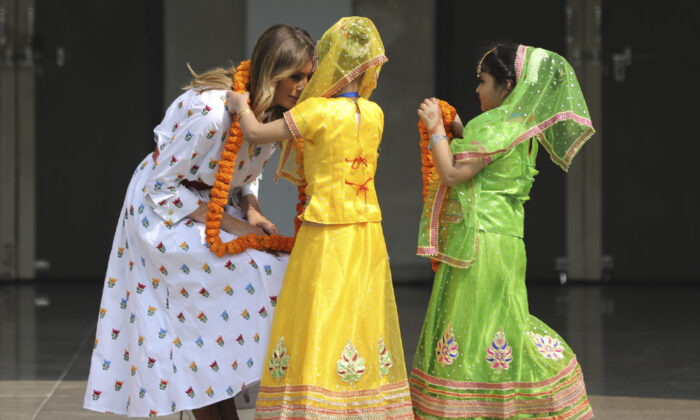 U.S. First Lady Melania Trump visited a “happiness class” at a government-run school in the Indian capital on Feb. 25.

The curriculum dovetails with her “Be Best” initiative to teach children and young adults to be kind, avoid drugs and take care of themselves.

A student band at the Sarvodaya Co-Educational Senior Secondary School played bagpipes as they greeted the first lady at the school, which was decorated with floral garlands and motifs.

She sported a floral wreath around her neck as she stopped at a reading room, spent time with kindergarten students and watched a yoga practice.

She later told them during brief remarks that “Sarvodaya” means prosperity to all.

Mrs. Trump stopped at a reading room, spent time with kindergarten students and watched a yoga practice. She also meditated with students as part of a “mindfulness” activity and said after the exercise that she felt relaxed.

The first lady said during brief, formal remarks that it inspired her to know that students start each day by practicing mindfulness.

“From mindful breathing, telling a story to a friend, listening to another classmate or simply connecting with nature, I cannot think of a better way for all of us to start our day,” she said.

She also told the students that seeing the program and hearing from their teachers proved to her “that the principles of ‘Be Best’ are not just limited to the United States but can be found throughout the world.”

Delhi Deputy Chief Minister Manish Sisodia, who oversees education, tweeted that the program’s early results had inspired confidence among local officials that the “happiness” classes are the “ultimate solution to all violence & hate in mindsets that we are facing worldwide.”