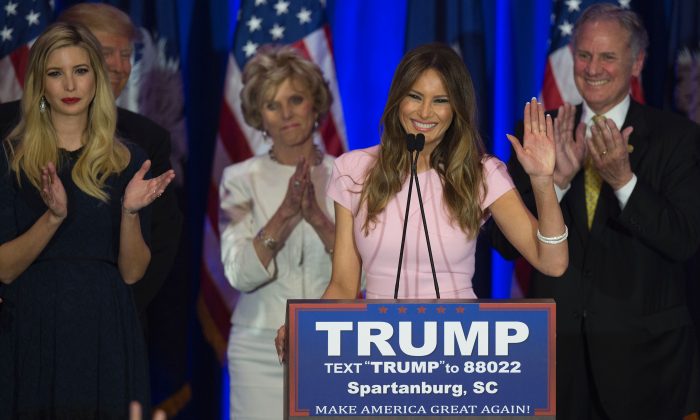 Melania Trump Says She’s Her Own Person: Who Is She?

Melania Trump insists she’s her own person, more than window dressing in her husband Donald Trump’s run for the White House.

That’s one thing the Slovenian-born former model has made clear, even as she’s stayed largely in the background as her husband’s No. 1 fan ahead of the Republican National Convention where Trump is poised to accept the party’s nomination for president.

So who is she? According to her official biography on the Republican National Committee’s website, Mrs. Trump is an “aqua-eyed beauty” with “natural elegance” who has “a passion for the arts, architecture, design, fashion and beauty.”

But most Americans probably know her better as Trump’s third wife who is 24 years his junior and who once posed pregnant in a gold bikini on the steps of her husband’s jet.

“I have my own mind,” she told Harper’s Bazaar in an interview published in January. “I am my own person, and I think my husband likes that about me.”

Mrs. Trump’s prime-time speaking slot Monday, her highest profile appearance to date, will give her a chance to tell Americans what type of first lady she would be — something she’s mostly steered clear of doing so far.

If Trump were to be elected president, Mrs. Trump would be the only first lady who is the third wife of a president and the first to be born and raised in a communist nation, according to Carl Anthony, historian at the National First Ladies’ Library. She wouldn’t be the first model — Pat Nixon and Betty Ford had modeled too. And Louisa Adams, who was born in England, was the first president’s wife to be born in another country.

Mrs. Trump remains a mystery to many. Dressed in high fashion couture, even on the campaign trail, she has tried to stay out of the spotlight. But she briefly became an issue in the race in March, when an anti-Trump super PAC released an ad showing a risque photo of her from a GQ photo shoot, showing her handcuffed to a briefcase, lying on a fur blanket.

“Meet Melania Trump. Your Next First Lady,” the ad said.

Mrs. Trump, 46, is often seen, but rarely heard. Instead of taking a leading public role, she has instead focused her time on the couple’s 10-year-old son, Barron.

She didn’t make her first appearance on the campaign trial until November, joining other family members on the stage at a rally.

“Isn’t he the best?” Mrs. Trump asked the crowd in heavily accented English. “He will be the best president ever. We love you!”

The glitter and glitz of being Donald Trump’s wife, and joining him in the run for president, is a far cry from the sleepy southeastern industrial town of Sevnica, where she was born in 1970 as Melanija Knavs. Her father, Viktor Knavs, was a car dealer while her mother, Amalija, worked in a textile factory. The family lived in an eight-story building right next to their daughter’s brightly painted primary school.

Then a part of Communist Yugoslavia, she grew up in apartment blocks overlooking a river and smoking factory chimneys.

She found an escape through modeling.

Her fashion career became a reality after she moved to the Slovenian capital, Ljubljana, to attend high school, and a photographer spotted the 5-foot-11 blue-eyed teen in the street. At age 16, she took modeling jobs in Milan, Paris and other fashion hubs, becoming proficient in English, German, French and Italian in addition to Slovenian and Serbo-Croatian, which was spoken all across Yugoslavia.

She changed her name to Melania Knauss and settled in New York in 1996. Two years later, she met her future husband at a party in Manhattan.