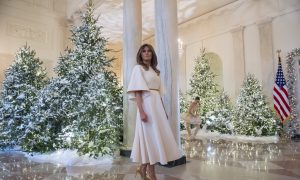 First Lady Melania Trump gave a brief farewell speech at Joint Base Andrews in Maryland before flying back to Florida together with her husband.

“Being your first lady was my greatest honor. Thank you for your love and your support,” Trump told a cheering crowd.

The 51-year-old Slovenian native exited the White House with her husband at approximately 8 a.m. on Wednesday, heading to President Donald Trump’s Mar-a-Lago resort in Palm Beach hours before President-elect Joe Biden would be sworn in as the 46th president of the United States.

Shortly before the first lady gave her final farewell speech, President Trump described his wife as a “woman of great grace and beauty and dignity” and “so popular with the people.”

During the couple’s stop at Joint Base Andrews, the president also addressed a crowd of supporters, saying: “We love you. We will be back in some form.”

Earlier this week, Melania Trump said in a farewell video to the nation released on Jan. 18 that serving in the role has been an honor.

“My fellow Americans, it has been the greatest honor of my life to serve as first lady of the United States. I have been inspired by incredible Americans across our country who lift up our communities through their kindness and courage, goodness, and grace,” she said. “The past four years have been unforgettable.”

“As Donald and I conclude our time in the White House, I think of all the people I have taken home in my heart and their incredible stories of love, patriotism, and determination,” the first lady continued.

Trump has focused on her Be Best initiative, which encourages children to reach their full potential. One component is trying to address the rise in bullying among kids. Another deals with the opioid epidemic, which has ravaged communities across the United States.

“In a few short years, I have raised awareness of how to keep children safe online; we have made incredible progress on our nation’s drug epidemic and how it impacts the lives of newborns and families, and we have given a voice to our most vulnerable children in the foster care system. Internationally, Be Best has evolved into a platform that encourages world leaders to discuss issues impacting the lives of children and allows them to share solutions. It has been an honor to represent the American people abroad. I treasure each of my experiences and the inspiring people I have met along the way,” she said.

The first lady urged parents to teach their children to do their best, educating them about Americans who worked hard and sacrificed for the good of the country, and teaching them how to lead by example and care for those in their community.

“The promise of this nation belongs to all of us. Do not lose sight of your integrity and values. Use every opportunity to show consideration for another person and build good habits into your daily lives,” Trump said.

“In all circumstances, I ask every American to be an ambassador of Be Best. To focus on what unites us. To rise above what divides us. To always choose love over hatred, peace over violence, and others before yourself. Together, as one national family, we can continue to be the light of hope for future generations and carry on America’s legacy of raising our nation to greater heights through our spirit of courage, goodness, and faith,” she continued.