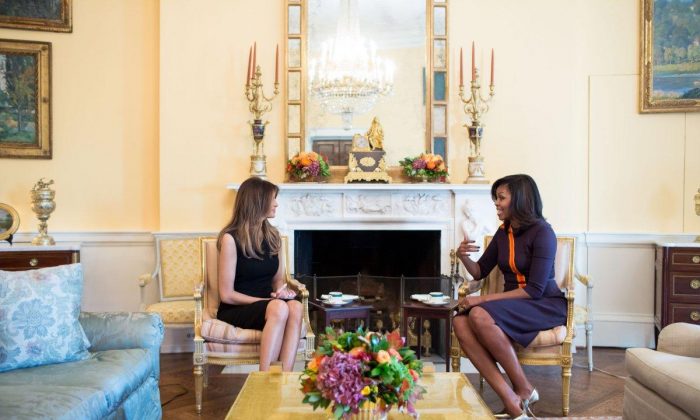 Melania Trump, the wife of President-elect Donald Trump, sat down with First Lady Michelle Obama at the White House.

Melania helped campaign for her husband during the election cycle—but has mostly kept a low profile. She’s rarely expressed political opinions of her own.

The first lady hosted the soon-to-be first lady inside the White House for tea and a tour of the residence, Press Secretary Josh Earnest said.

The White House also released a photo showing Trump and Obama talking while sitting in gold chairs. The two mothers reportedly talked about raising children inside the White House. Trump’s son Barron, 10, will be the first boy to be raised inside the White House since the presidency of John F. Kennedy Jr. Earnest added, “That’s a rather unique childhood, and the two women had an opportunity to talk about that experience and being a good parent through that experience,” reported Politico.

“I think all of you have heard both the President and First Lady talked about the quality of time that they’ve spent on the Truman Balcony, and Mrs. Obama took the opportunity to show it off to Mrs. Trump,” Earnest said, New York Daily News reported.