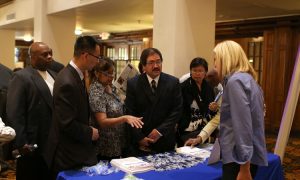 US Unemployment May Hinder Recovery
0 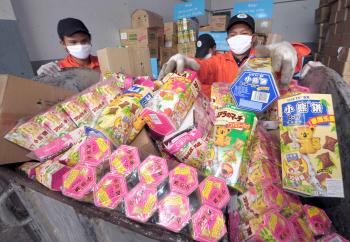 GOT MELAMINE? Thai officials fill snacks and food products tainted with the toxic chemical melamine in a container prior to destruction in Ayutthaya, the capital city of Ayutthaya province on Nov. 10. (Pornchai Kittiwongsakula/AFP/Getty Images)
US

NEW YORK—A food safety expert is warning that contaminated infant formula could be damaging American babies, and that the US Food and Drug Administration is not doing enough.

“This isn’t something that accidentally got in. It appears that it was deliberately added to take a low value substance, and make it a more high value substance,” Dr. Hansen said in an interview with New Tang Dynasty Television earlier this week.

Melamine is a chemical normally used in the manufacturing of plastics. The chemical has no nutritional value, but can make food appear to have higher protein content during simple tests. When melamine is combined with cyanuric acid it becomes toxic and even deadly.

Dr. Hansen said when melamine and cyanuric acid occur together in solution they link together and form crystals that look like little pins.

“And then what that does is it can cause kidney stones or the kidneys can fill up with these little crystals that are like little pieces of glass or needles and that’s what causes the damage,” he said.

He said when autopsies were carried out after thousands of pets died in the US last year after eating melamine-tainted pet food from China, their kidneys were full of these little crystals.

The pet food was contaminated with melamine and cyanuric acid in wheat gluten that Chinese manufacturers had added to the product.

“And wheat gluten is the high protein part of wheat and that sells for a lot of money relatively and what they were doing was taking wheat flour and adding melamine to it,” he said.

Dr. Hansen said although the FDA’s current focus is infant formula the problem could be much larger.

He said any food of Chinese origin that could contain milk or a milk derivative, like milk protein, could have the toxic melamine-cyanuric acid combination.

“The FDA has taken some action but there is a problem because they are only focusing on products that come directly from China. Those milk products can actually be shipped to another country, made into something and then sent into the United States,” he said.

The U.S. Government has put a hold on any milk or milk products from China.

Dr. Hansen said companies had come forward and said, “We didn’t source any products from China.”

He recommends that the FDA check all products with ingredients sourced outside the United States to ensure the safety of American consumers.

“Did any of these ingredients come from outside the United States? If the answer to that question is yes, then they could have gotten the milk ingredient from another country that originally came from China,” he said.

The FDA has tested 1,500 food products and have tested 74 samples of infant formula.

Two of these were found to be contaminated with melamine.

“That is not a particularly low level. And in fact, if you look at Nestles, one out of the four samples from Nestles was positive,” he said.

“We are very concerned with infant formula because that is the only thing that babies eat.  So if that is contaminated, they need to be doing far more testing,74 samples is completely inadequate,” he said.

“They should recall and sample a whole lot of milk products,” he said.

“I think what this melamine scandal shows is how woefully inadequate the FDA is terms of funding and being able to inspect food coming in from overseas,” he said.

China’s infant formula scandal poisoned more than 300,000 children and prompted the US Food and Drug Administration to issue a Health Information Advisory to the public on September 12, 2008.

According to the FDA website, “Infant formula manufactured in China, possibly available for purchase at Asian markets, could pose a risk to infants. No Chinese manufacturers of infant formula have fulfilled the requirements to sell infant formula in the United States.”

The FDA said that levels of melamine alone or cyanuric acid alone, at or below 1 part per million (ppm) in infant formula do not raise public health concerns.

Michael Hansen is a biologist and ecologist has been working with the Consumers Union for more than 20 years. He talks frequently to media on critical food safety and environmental health issues including mad cow disease, genetic engineering, and pesticide use.