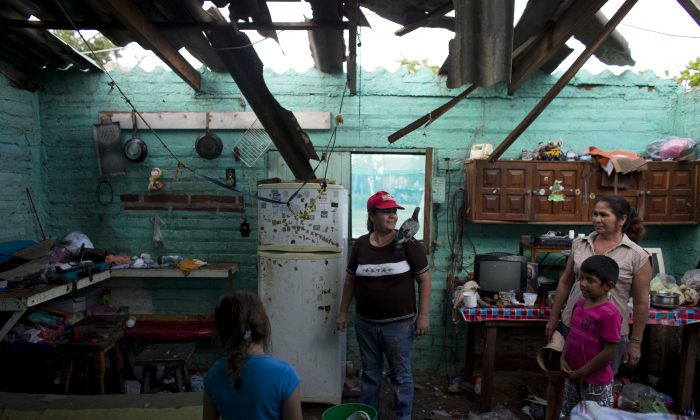 CHAMELA, Mexico—Just a day after menacing Mexico as one of history’s strongest storms, Hurricane Patricia left surprisingly little damage in its wake Saturday, Oct. 24, and quickly dissipated into a low-pressure system that posed little threat beyond heavy rain.

The hurricane’s most powerful punch landed on a sparsely populated stretch of Mexico’s Pacific Coast before the system crashed into mountains that sapped its potentially catastrophic force. The popular beach city of Puerto Vallarta and the port of Manzanillo were spared the brunt of the violent weather.

Authorities were still checking on some isolated areas, where roads had been blocked by downed trees, but the devastation appeared to be far less than feared.

There were no reports of deaths or injuries, said Roberto López Lara, interior secretary for the state of Jalisco.

Later, President Enrique Peña Nieto reported that between 3,000 and 3,500 homes had been damaged and the storm also affected 3,500 hectares (about 8,650 acres) of farmland. He said 235,000 people had lost electricity when the storm hit, and about half had power restored by Saturday.

It was a remarkable outcome, considering that Patricia had once been a Category 5 hurricane with winds up to 200 mph (325 kph) before coming ashore with slightly less power in an area dotted with sleepy villages and a few upscale hotels.

As the storm spun inland, it collapsed into fast-moving bands of rain aimed at already sodden Texas.

“Those were the longest five hours of my life,” said Sergio Reyna Ruiz, who took cover between the shaking concrete walls of a neighbor’s home when Patricia passed over the hamlet of La Fortuna, about 2 miles (3 kilometers) from the ocean. “Five hours riding the monster.”

Before the storm hit, Reyna tried to secure the shingles of his roof with metal cables. But looking up from the inside on Saturday, the ceiling was a patchwork of old tile and blue sky. He and family members next door tried to clean up, sawing through a downed tree and putting waterlogged mattresses and books into the sun to dry.

All were thankful that everyone survived: “It’s something to tell the grandchildren,” Reyna said.

Down the road in Chamela, people picked through boards, tree limbs, and other refuse for anything salvageable. All 40 families that live there rode out the storm at a shelter in nearby San Mateo. When they returned, they found little that was recognizable.

Arturo Morfin García wielded a machete trying to clear debris from around his home, which was reduced to a jumble of bricks and beams. The only part left standing was a concrete bathroom at one end.

“It wasn’t hard to leave. It was hard to come back and find this,” Morfin García said. “So much work to build something. It makes me very sad, but what can we do with these natural phenomena?”

In Manzanillo, high winds and waves blew out windows and damaged some buildings. Trees and utility poles were toppled. An enraged sea battered the Hotel Barra de Navidad in a nearby town, scooping sand away from the foundations.

Puerto Vallarta, home to some 200,000 people, including thousands of U.S. residents and visitors, was largely unscathed. After the storm passed, people snapped selfies next to a seaside sculpture, and business owners swept sidewalks as they would on any morning. Puddles dotted the downtown district, but no more than a passing thunderstorm might leave.

Patricia plunged ashore about 65 miles (110 kilometers) southeast of Vallarta, which was protected from much of the fury by mountains.

“We were fortunate as to where it made landfall. It was not a densely populated area,” said Dennis Feltgen, a meteorologist and spokesman for the U.S. National Hurricane Center. “You and I would be having a very different conversation if this went over the top of Puerto Vallarta.”

He said the lack of fatalities was probably the result of the storm’s narrow footprint. Category 5 winds extended 15 miles out on either side of the eye, and hurricane-force winds extended for 35 miles from the center of the storm.

On Saturday, Patricia’s maximum sustained winds had dropped to 30 mph (45 kph), according to the hurricane center. The storm’s remnants were expected to feed into existing rain hitting southern Texas.

“There’s an area of low pressure that’ll be forming along the Texas coast, and that will be about the time that moisture from Patricia will be arriving,” Feltgen said. The wet weather was forecast to spread from Texas to the central Gulf Coast.

By late afternoon, the hurricane’s remains were about 45 miles (75 kilometers) southwest of the Mexican city of Monterrey, moving to the northeast at 22 mph (35 kph).

That such a monster storm could inflict so little harm seemed wondrous. Patricia formed suddenly on Tuesday, Oct. 20, and quickly strengthened to a hurricane. Within 30 hours it had zoomed to a record-beating Category 5 storm, catching many off guard with its rapid growth.

By Friday, it was the most powerful hurricane on record in the Western Hemisphere, with a central pressure of 880 millibars, according to the hurricane center.

Patricia’s power while still out at sea was comparable to that of Typhoon Haiyan, which left more than 7,300 dead or missing in the Philippines two years ago, according to the U.N.’s World Meteorological Organization.

The mountains in the area quickly weakened the storm, and the coastal landscape did not offer the large area of shallow water necessary for a storm surge that could have become a devastating wall of water.

The storm was also moving fast enough at landfall—about 20 mph (35 kph)—that its heavy rains “did not stay in place long enough to generate the kinds of devastating floods we’ve seen in the past from Mexican hurricanes,” said Jeff Masters, director of meteorology at Weather Underground.

Mexico’s transportation secretary, Gerardo Ruiz Esparza, put it another way: “Nature was good to us.”