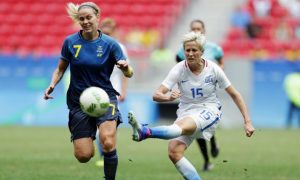 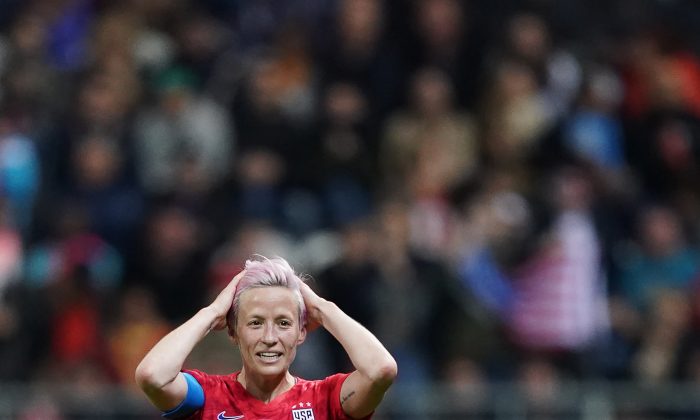 Rapinoe told Yahoo Sports in May, “I’ll probably never put my hand over my heart. I’ll probably never sing the national anthem again.” Additionally, Rapinoe has repeatedly disparaged the president. In light of her conduct, Rapinoe shouldn’t have the privilege to represent her country on the pitch and should not serve as captain of the team.

Many of those who “kneel” claim that they are doing so to protest inequality and injustice around the country. While Rapinoe no longer kneels because of a rule implemented by U.S. soccer, her intent appears to be no different.

Rapinoe also told Yahoo Sports: “Because I’m as talented as I am, I get to be here, you don’t get to tell me if I can be here or not. So it’s kind of a good ‘f-you’ to any sort of inequality or bad sentiments that the [Trump] administration might have toward people who don’t look exactly like him. Which, God help us if we all looked like him. Scary. Really scary. Ahh, disturbing.”

Rapinoe’s message is misguided in several respects. First, the national anthem has nothing to do with President Donald Trump or any other individual president. Therefore, Rapinoe’s desire to spite the president isn’t a logical reason to refrain from reciting the anthem or putting her hand on her heart.

To the contrary, there are other, more compelling, reasons why she should stand for the flag and recite the national anthem. She should do so to honor those who paid the ultimate sacrifice for our freedom, to unite us as Americans, to honor the reality that we live in a democracy where we elect our leaders and aren’t ruled by a lifetime king, to salute the principle of justice, and to set an example for the next generation.

While Rapinoe is not the first athlete to protest the national anthem, there is a strong argument that her decision to do so is worse given the team that she plays on and her role on the team. Specifically, while athletes like Colin Kaepernick knelt during the national anthem, Kaepernick didn’t represent the United States nor did he serve as captain of a team.

Unlike Kaepernick (whose decision to kneel was also highly controversial and frowned upon by many), Rapinoe plays for, and represents, the United States and serves as a captain of the team. Therefore, her decision not to recite the national anthem and not to place her hand on her heart is, arguably, more egregious than Kaepernick’s.

First, by representing the country on the world’s largest stage, Rapinoe’s conduct reflects an unparalleled level of disrespect for the country that she plays for. Second, by serving as a captain, Rapinoe should be a role model for her teammates and for people around the world, including children. Sadly, her decision to ignore the national anthem fails in this regard.

There are many talented soccer players around the country who love the United States and what it stands for, and who would proudly stand and recite the national anthem with their hand on their heart. If Rapinoe is unable or unwilling to do so, she should, at the very least, lose her role as captain or play on another team.

It makes no sense for her to represent the very nation that she has chosen to disrespect.