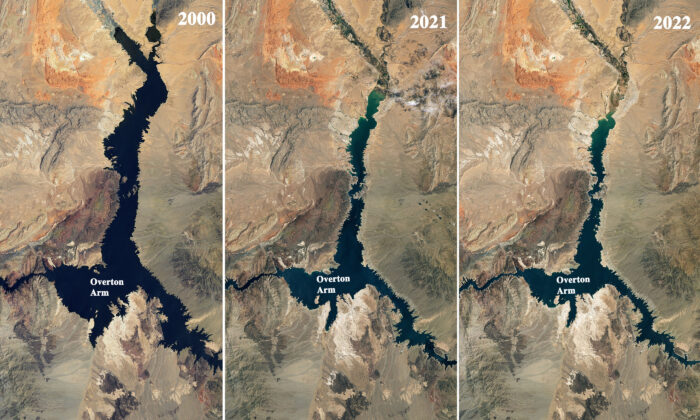 Photos of the Colorado River showing drought at the Overton Arm between 2000 and 2022. (Compilation of NASA photos)
Regional News

Megadrought Threatening Millions of Americans With Loss of Water and Power

The Colorado River Basin meanders through seven U.S. states and supplies water to Lake Powell in the Upper Basin and Lake Mead in the Lower Basin. In turn, these reservoirs deliver water and power to millions of Americans.

Indeed, on Aug. 16, 2021, the Bureau of Reclamation issued the first Level One Shortage Condition in the Lower Basin when Lake Mead fell below a water elevation of 1,075 feet above sea level. Then, in March, the bureau reported that Lake Powell fell below the target elevation of 3,525 feet for the first time since the 1960s.

And while Congress has taken steps to address the flagging water supply, a 20-year megadrought and unsustainable allotments are hampering its efforts.

Indeed, the period from 2000 to 2021 was the driest on record for many states in the West.

In Mancos Valley, an area considered a Colorado agricultural utopia with cooler weather and “plenty” of water, streams ran at half the average flow, reducing water for hundreds of farmers and ranchers.

Moreover, headwaters for the Colorado River Basin start in Colorado and Wyoming, meaning the lack of water didn’t just affect the two states.

“Water conditions on the river depend largely on snowmelt in the basin’s northern areas [of Colorado and Wyoming],” a Congressional Research Service report (CRS) states.

Still, it could probably pull through if the megadrought was the only problem facing the Colorado River Basin. Unfortunately, federal and state mismanagement have compounded the megadrought, driving the river to the brink of disaster.

In 1922, the Basin States of Colorado, Utah, New Mexico, Nevada, Arizona, and California established the Colorado River Compact to release water from the lakes based on basin storage conditions.

Specifically, under the compact, each basin is allocated 7.5 million acre-feet (MAF) per year—one-acre foot equals about 326,000 gallons—and a certain percentage goes to the Basin States based on water levels in the dams.

In 1944, the United States entered a treaty with Mexico to provide an additional 1.5 MAF from the basin to Mexico.

Markedly, at the onset of the compacts, federal and state governments assumed that river flows would average 16.4 MAF per year, CRS states. But that turned out to be a deeply flawed assumption.

According to the Department of Energy, hydropower is primarily used for ramping energy flexibility and represents less than 6.7 percent of U.S. electricity generation capacity.

In other words, if an area relies on solar and exceeds capacity, or the sun sets, hydropower can “ramp up” energy production quickly—hydropower provides approximately 40 percent of black start resources (restoring a power station to operation without relying on the external electric power transmission network after a total or partial shutdown).

It’s also considered one of the “cleanest” and “cheapest” forms of energy.

The 1936 Hoover Dam along the Lower Basin generates about 4,000 GW of electricity per year for customers in California, Arizona, and Nevada, according to a CRS report.

The drought and excessive allotments threaten hydropower generation at both reservoirs.

Indeed, if water levels reach 3,490 feet at Glen Canyon Dam, hydropower production is no longer possible. And while a water level of 3,532, as reported on Aug. 29, may sound sufficient to maintain electricity production, since August 2020, water levels have dropped 67 feet.

Bowing to the reality of dwindling water levels, Congress began enacting contingency plans for when and if water levels dropped below a certain level in Lake Mead and Lake Powell.

For Lake Mead, the Drought Contingency Plan (DCP) decreases water deliveries to Arizona and Nevada if the water level falls below 1,075 feet. For Lake Powell, the Drought Response Operations Agreement kicks in when water levels fall below 3,525 feet. It also reduces annual allotments and authorizes releases from other reservoirs, such as Blue Mesa.

“Despite these efforts, storage levels at both reservoirs have continued to fall,” CRS stated on Aug. 18. “[Bureau of] Reclamation studies indicate the ongoing possibility of Lake Mead falling significantly more [and triggering additional shortages/actions] within two years.”

Consequently, Reclamation informed the Basin States that they need to conserve an additional 2 to 4 MAF over the near term. If the states failed to devise a plan of “voluntary commitments” by mid-August, under its congressional authority, Reclamation stated that it was “prepared to act unilaterally.”

In response to Reclamation, on July 18, Upper Basin representatives stated their water users were already “suffering chronic shortages” and “the options the Upper Division States have available to protect critical reservoir elevations are limited. The Upper Basin is naturally limited to the shrinking supply of the river, and previous drought response actions are depleting upstream storage by 661,000 acre-feet.”