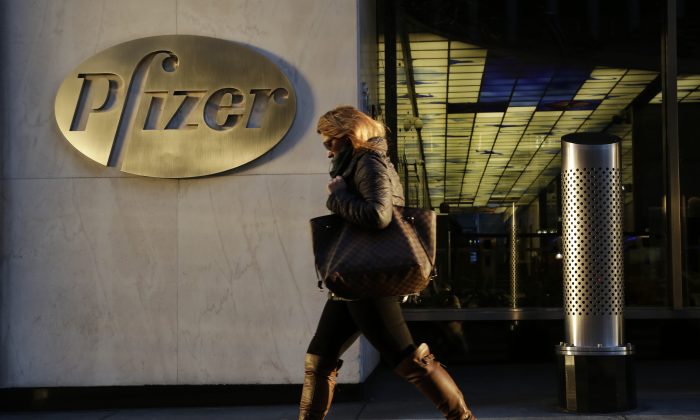 Pfizer Inc. (NYSE: PFE) and Allergan (NYSE:AGN) agreed to merge in a roughly $160 billion deal, which is the largest deal ever for the pharmaceutical sector. The announcement comes a few days after Treasury tightened the rules to curb such deals.

“Through this combination, Pfizer will have greater financial flexibility that will facilitate our continued discovery and development of new innovative medicines for patients, direct return of capital to shareholders, and continued investment in the United States, while also enabling our pursuit of business development opportunities on a more competitive footing within our industry,” Ian Read, chairman and CEO of Pfizer said in a statement announcing the deal.

The deal will close in second half of 2016. After the merger, the company will be called Pfizer Plc and will trade under the PFE symbol.

“The combination of Allergan and Pfizer is a highly strategic, value-enhancing transaction that brings together two biopharma powerhouses to change lives for the better,” said Brent Saunders, CEO of Allergan in the announcement.

They accelerated the deal to get around any issues associated with a potential congressional action on tax inversion.
— Robert Eubanks, Slalom Consulting

The announcement is the latest example of a mergers and acquisitions trend in the pharma industry. If completed, Pfizer will be able to move its tax domicile to Ireland, which is a strategy called tax inversion. However the U.S. government is tightening the rules to end the practice.

“I was not surprised at all by the news. I think they accelerated the deal to get around any issues associated with a potential congressional action on tax inversion situation,” said Robert Eubanks, partner at Slalom Consulting.

Tax inversion, or corporate inversion, is a strategy used to reduce the tax burden of a corporation by relocating its domicile to a lower-tax country.

“The transactions involving a tax inversion have been a major driver of global M&A throughout 2014, particularly in the pharmaceutical industry,” said advisory firm IMAP in a report.

Forty-seven U.S. companies have moved their tax bases outside the United States since 2004. And about half of the transactions took place in the last few years.

There were 12 deals leading to tax inversions in 2014. Seven of those deals were in the pharma industry and three of them were in medical technology, according to IMAP. These deals have accounted for a total transaction volume of $160 billion.

Some notable transactions include Illinois based Horizon Pharma’s acquisition of Ireland-based Vidara Therapeutics, and Pittsburgh based Mylan’s acquisition of one part of Abbott’s generic business.

The transactions involving a tax inversion have been a major driver of global M&A.
— IMAP

“This transaction will set off lot of alarms, discussions, and concerns about these inversions, especially with the upcoming elections. The Congress will end up doing something. This will help drive much needed tax reform,” said Eubanks.

Efforts to Lower the Tax Bill

If Pfizer completes Allergan acquisition, it will finally get what it has long desired: a chance to move its headquarters outside the United States. For years, Pfizer’s CEO Ian Read has criticized the U.S. tax system. He claims the tax system has placed them at a competitive disadvantage compared with the overseas rivals.

Allegran’s headquarters are in Dublin yet most of its operations are largely in New Jersey. In contrast to Pfizer’s 25.5 percent effective tax rate in 2014, Allergan reported an effective tax rate of 4.8 percent for the same period.

Indeed, tax inversion is not the only driver for the deal, according to experts. There is a small pool of existing large-scale assets and heavy competition from strategic buyers in the health care sector. Narrowing opportunities for high-growth pharmaceutical products has driven the recent rush for acquisitions in the sector.

Rather Than Worry About Tax ‘Inversions,’ President Obama and Congress Should Fix the Tax System

Pfizer has long been looking for companies with innovation and higher growth, according to Eubanks. Pfizer has seen a decline in revenues for the last 5 years, whereas Allergan has grown very quickly. This makes the company very attractive for firms like Pfizer.

Through this acquisition, Pfizer will be able to broaden out its innovative pharma line portfolio. Besides wrinkle treatment Botox, Allergan owns top selling brands like Restasis, a treatment for dry eyes and Namenda, a therapy for Alzheimer’s.

Viagra and Celebrex are Pfizer’s top brands. The company also makes drugs such as cholesterol treatment Lipitor, pain treatment Lyrica, and antibiotic Zithromax. If the merger goes through, Pfizer will take back the top position from Novartis and become the biggest drug maker in the world.

The U.S. corporate income tax rate, 35 percent, is the third highest in the entire world. Moreover, the United States makes U.S. companies pay that rate on all their foreign earnings as soon as these earnings are repatriated.

To avoid high taxes, U.S. corporates leave cash in their foreign subsidiaries, piling up to an amount across all industries of $ 1.1 trillion, according to Moody’s rating agency. This creates a strong incentive for U.S. companies with large overseas markets to reincorporate in low-tax countries like Ireland. Ireland’s corporate tax rate is 12.5 percent.

In 2014, the corporate tax for merged entities fell 8.9 percent on average compared to the tax rate of the U.S. corporation before the transaction, according to IMAP.

Inversion transactions have become a significant policy concern for the U.S. government as it leads to substantial erosion in tax revenues. The total loss for the U.S. tax system from these inversions amounts to billions of dollars, according to experts.

“Today, Treasury is taking additional actions to make it more difficult for U.S. companies to invert and to further reduce the tax benefits of inversions,” said the press release.

The total loss for the U.S. tax system from these inversions amounts to billions of dollars.

The Treasury has been working together with Congress for several years in an effort to reform the business tax system. President Barack Obama announced plans to stop inversions in 2014.

“Genuine cross-border mergers make the U.S. economy stronger. … But these transactions should be driven by genuine business strategies and economic efficiencies, not a desire to shift the tax residence of a parent entity to a low-tax jurisdiction simply to avoid U.S. taxes,” said the statement.

The United States is not the only country to experience the phenomenon of corporate tax inversions. Less than a decade ago, the United Kingdom experienced a similar trend due to its uncompetitive tax code that drove companies abroad.

However it has successfully reversed this trend and now many American firms aim to move to England. The country gradually reduced the corporate tax rate from 28 percent in 2010 to 20 percent in 2015. It also reformed its worldwide tax system to a territorial system.

“The U.K. is a prime example of how lower rates and a territorial tax system can help restore competitiveness to a country’s tax code while ensuring adequate revenue. … The U.K. now raises more corporate revenue as a percentage of GDP than the United States,” said Tax Foundation chief economist William McBride.

The United States is not the only country to experience the phenomenon of corporate tax inversions.

The moves by the Treasury were not likely to derail the deal, according to experts.

Pfizer is not seeing the Treasury Department’s new anti-inversion regulations as threat and appears determined to push ahead with the world’s largest corporate inversion on record.

“I think this deal is a pretty done deal. [On paper] Allegran is actually acquiring Pfizer. They set this up so that the Congress cannot impact the transaction. So this transactions is fairly safe,” said Eubanks.