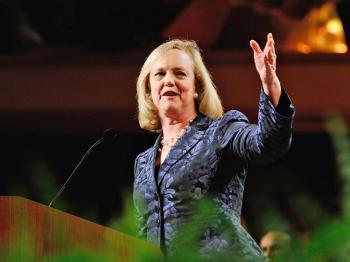 KPCB, the Menlo Park, Calif.-based venture capital firm, hired Whitman as an adviser and strategist, serving the firm’s entrepreneur clients and advising them on the technology industry.

Whitman is credited for growing eBay from a dot-com era startup to one of the biggest technology companies. After joining the firm in 1998, eBay quickly transformed into an Internet giant with more than 15,000 employees by 2008.

She resigned as CEO of eBay in 2007, but remained onboard until 2008 as a member of the board. At one point, Whitman was named as one of the world’s most powerful women by Fortune Magazine.

“Meg helped build eBay into one of the leading players in online commerce,” said Ted Schlein, a KPCB partner. “Her experience and strategic advice will be invaluable to entrepreneurs who are rapidly changing the way business is done.”

“I’ve known the KPCB team for years—they are fabulous advocates for technology-based start-ups,” said Whitman in a statement.

Prior to her career at eBay, Whitman had been chief executive officer of flower delivery service FTD, as well as holding management positions at media company Walt Disney Co., and consumer products maker Procter & Gamble Co.

Whitman is also a board member at technology firm Hewlett-Packard Co.