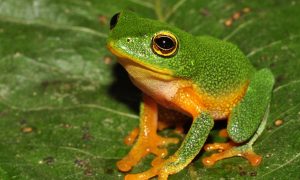 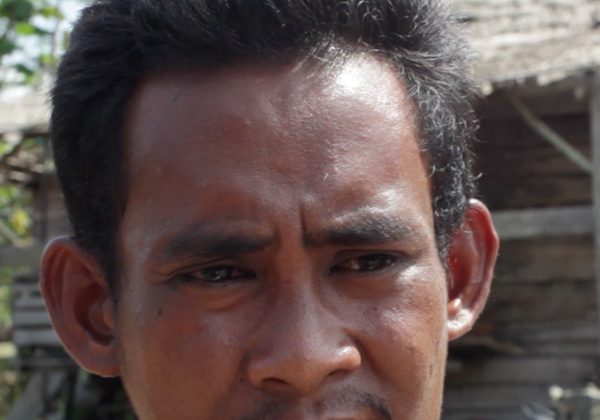 "I make six times the amount of money logging as I would working my small plot of land or even working legally in a pulp and paper or palm oil plantation." An illegal logger explains the economic conditions in South Sumatra. Photo by Robert S. Eshelman.
Environment

Meeting an Illegal Logger in Indonesia

It took five hours by boat from Kepayang in the Indonesian province of South Sumatra to arrive at this remote river community, where most of the residents are illegal loggers.

Sembilang National Park is another hour by river to the north. South Sumatran environmental NGOs and government park rangers express fear at the rising rate of illegal logging in the areas bordering the park. They worry that unchecked the logging will soon encroach upon the park, putting its rich flora and fauna at risk.

It’s villagers from this community and others nearby that are threatening the protected preserve and feeding Indonesia’s massive market in illegally harvested wood.

An estimated $2 billion of government revenue was lost annually in Indonesia between 2003 and 2006 because of illegal logging, corruption, and mismanagement in the forestry sector, according to a 2009 report by Human Rights Watch. That amount dwarfs the annual budget of the Ministry of Health and could potentially provide health care services to millions of poor Indonesians.

Big logging interests and corrupt officials benefit from the practice. But they rely on men like those living in this village to wield the chainsaws and bring the logs to market.

“I have a small plot of land, where I’m growing rubber trees,” says the 25-year old man, who I’ll call Sigid. “I cannot make enough money from it. So I take logs from the forest,” he says, nodding his head toward the dense groves of trees surrounding us.

Although he granted an interview and allowed photographs, Sigid asks to remain anonymous. He speaks softly and draws continuously from a cigarette, revealing a mouth of mostly bare gums and a few teeth, several of which are cracked and worn.

Sigid speaks with me while sitting on a stack of freshly felled logs, waiting to be hauled down river to sell. He is barefoot and dressed in a grey, long-sleeve shirt and brightly colored, knee-length shorts. A sparse mustache lines his upper lip.

“I make six times the amount of money logging as I would working my small plot of land or even working legally in a pulp and paper or palm oil plantation,” he says.

“All I need is five hundred dollars a month to support my family and invest in my rubber cultivation,” he says. Eighty percent of the villagers here log illegally, he says, and they do so because of identical economic imperatives.

A group of villagers has petitioned South Sumatra’s provincial authorities to establish a hutan desa, a community-run forestry plantation. But government officials have failed to respond to the request and the villagers suspect a bribe is expected in exchange for approval. They aspire for a legally registered logging and rubber plantation and modest prosperity. In the face of government inaction and sparse moneymaking opportunities, though, they turn to the abundant natural resources surrounding the village.

Indonesia is Southeast Asia’s largest economy and a member of the Group of 20, comprising the world’s largest economies. Yet here in the remote areas of South Sumatra, one finds infrastructure more closely resembling Sub-Saharan Africa nations than fellow G20 economies like Germany or the U.S.

This village lacks running water and residents drink from the same source – the canal in which we floated in on – to wash their clothes and dispose of waste as they do to drink. Crude wooden platforms built above the canal serve as communal toilets.

There are no roads connecting the village to surrounding areas and no power lines feed into it either. Diesel generators provide electricity for a few hours each night.

“I don’t log every day,” says Sigid, “but when I do, I wake up at six in the morning and drive my tractor several miles into the forest.”

“We cut down trees all day and return home at four or five in the afternoon, that is if the tractor doesn’t break down,” he says, laughing. “I’d rather be working my rubber trees, though,” he says.

Like the absence of publicly funded utility and transportation infrastructure, law enforcement of forestry regulations is lacking as well.

“There’s never any police patrolling in the forest,” he says, “but they do police the rivers sometimes.”

“If I’m not caught on the river, I take the logs to Kepayang and sell them to some men who take them to saw mills.”

Sigid refuses to elaborate on whom he meets or where he meets them, wanting the shadowy world of middlemen, who connect loggers like him to sawmill owners, just that – shadowy.

He’s never been arrested but says he has been detained five times by police on the rivers. When that happens, he says, the police confiscate his wood and sell it to the very same men that he would meet in Kepayang. Sometimes they pay him a small bit of money for his labor but not so much that they don’t reap a rich bounty from what they’ve confiscated.

It’s a livelihood he would gladly abandon given the right incentive.

“I’d give up logging if the government would build infrastructure, like roads, that would allow us to harvest and sell our rubber more efficiently. With a road we could much more easily get to Kepayang with the rubber harvested from our hutan desa, rather than having to travel several hours by boat with illegal logs,” he says.

Traveling back to Kepayang as the sun begins to slowly disappear below the horizon, my translator and I are blocked by a kilometer-long flotilla of logs bound together by bark and rope. A dozen loggers have pulled this timber from the forests surrounding the national park – all of it logged illegally, they say.

Whether it is this group of men – or the police that might confiscate the logs further down stream – who sell these logs, what is revealed here in this remote area of South Sumatra is the first step in a long – and shadowy – process of denuding Indonesia of its natural resources and feeding the multi-billion dollar market in illegal timber.

In the absence of roads, adequate electricity, running water, and plumbing, or economic alternatives, it’s difficult to envision how loggers like Sigid will idle their chainsaws and seek another way of making ends meet.