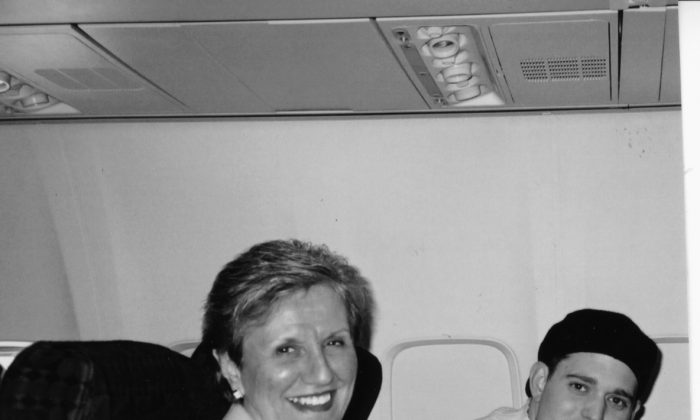 Michael Bublé and Beverly Delich en route to Los Angeles, where they lived for a year in 2002. (Courtesy of Beverly Delich)
Entertainment

NEW YORK—It’s taken two decades for the Canadian crooner and songwriter Michael Bublé to make it to star status from his small-town days in Vancouver. But the story behind Bublé’s success can be attributed to none other than one woman—Beverly Delich.

Delich released the biographical novel “Come Fly With Me” in November of 2013. In it, she detailed Bublé’s rise to stardom, stories from their journey, personal recollections, and photos of the two as they worked together 20 years.

Delich met with me on July 8, 2014, to remember the long years of trial and error, and what all those years have taught her about making it in the music industry.

Once upon a time, Delich worked as an interior decorator. But one day, she met Ray Carroll of “The Platters” in Vancouver. Having been a cantorial soloist for seven years, she developed an ear for good a cappella performances.

Carroll proposed that they start a talent agency together, and so they opened Silver Lining Management. The two started hosting talent shows. They held a contest at a Vancouver club in 1993 one time. Though the province’s legal drinking age is 19, the mischievous 18-year-old Bublé showed up.

When Bublé got up on stage and sang the 1924 classic “It Had to Be You,” the crowd went wild. Delich and Carroll named Bublé the winner, but then Delich noticed the error.

Even though Bublé didn’t take the prize home, he made a lasting impression on Delich. His performance was what set the standard for a “full package” for years to come—a great voice, a positive attitude, and the ability to entertain.

“He always had that initial charisma—everybody loved being around him—they loved watching him and listening to him,” Delich said. She became Bublé’s manager in 1995 and would remain so until 2002, when Bublé would fly the nest.

Journey to the Brass Ring

There were many challenges for young performers, especially those singing in the old-school genre. Bublé had the deep voice of Elvis Costello, the charisma of Elvis Presley, the talent of Michael Jackson, and sang old Frank Sinatra tunes.

Because it was a narrow niche, and people weren’t looking to old tunes at that time, there was too much competition.

Sometimes when Delich would approach other artists’ managers or record labels, they would turn her down, saying that they didn’t know what to do with Bublé.

“Because he was young and extremely talented, I stayed. I just hung in there. And yes, I was discouraged many times, but I never let him know that,” Delich said.

Bublé had his own struggles. One of them was insecurity.

“He was always a little nervous,” she said, although noting that it was what kept him going. He yearned for the stars, was never too self-confident, always thinking that he could do better, she said.

“He always wanted the brass ring. Big management company and a record deal … and it had to be a big record company,” she said.

When reporters ask Delich when did she know that Bublé had made it, she is never really able to pinpoint a time.

“For me, it was just a stepping stone at a time,” she said. But if she were to qualify that, it would be after Bublé made a CD with renowned producer David Foster and after Warner Bros. signed him in 2002.

In 2003, Delich passed on the torch to the Bruce Allen talent management agency, although she’s always stayed close to Bublé.

“I’ve never met anybody that really had that whole package again,” she said. “Honestly, it’s like winning the lottery.”