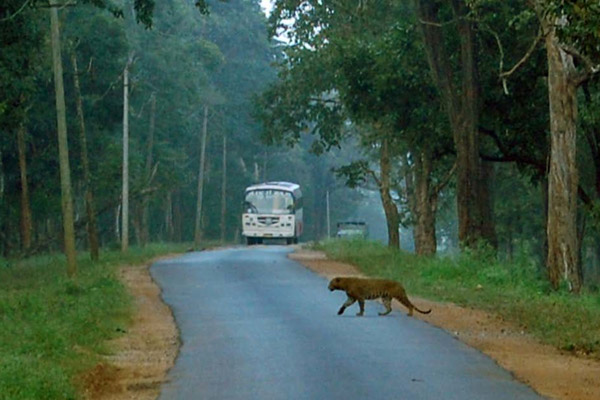 On the front page of the Times of India from August 20 in the southern city of Bangalore, is a short news piece tucked away in a corner: “A leopard was spotted near the Mangalore airport…the animal vanished when it saw people…the big cat did not approach the runway.”

Such news reports are not uncommon in a country with an annual GDP that has grown at an average rate of seven percent over the last five years. This boom in infrastructure and population has forced India’s wildlife to eke out a creative existence in an increasingly human-modified environment. Big cats such as the leopard (Panthera pardus) are often spotted within large cities, on railway tracks, and sadly, on India’s burgeoning and sprawling road network. According to the slowly expanding field of road ecology, which focuses on the effects of roads on wildlife, road kill inevitably accompanies roads—and is no longer restricted to domestic animals alone.

In a recent study lead by Sanjay Gubbi, Tiger Program Coordinator with Panthera and an experienced conservationist, there were 23 leopards killed in road accidents from July 2009 to June 2014 (a period of 5 years) in the southern Indian state of Karnataka alone. A further two leopards met their ends in train accidents.

“It’s very sad to witness a secretive, shy, and beautiful animal in such situations,” Gubbi reported to mongabay.com in an interview. “At times there will be [few] external injuries to the animal, but the leopard would be completely paralyzed, mostly in the hind side of the body, due to [a] vehicular collision.”

In some cases, according to Gubbi, the animal could even limp away and meet a painful death that would go unnoticed by us. This mortality rate works out to be roughly one leopard killed on roads every three months in the southern state—a rate that is most certainly an underestimate of true road-related mortality, but is still highly unlikely to be sustained by equivalent births in the current population. Although there are no fixed estimates of leopard numbers due to the difficulty of tracking these elusive animals, Gubbi puts the number at around 1,000 animals in Karnataka.

The leopard, of which there are nine subspecies, is classified as Near Threatened by the IUCN, and it already faces threats such as poaching and retaliatory killing during conflicts that arise in human-dominated landscapes. But how does such a large predator subsist in this ever-shrinking, urbanized habitat?

A fascinating study in the journal Oryx investigates leopard diets in the crop lands of Ahmednagar district in the state of Maharashtra in India. By analyzing leopard scat, authors Vidya Athreya with the Wildlife Conservation Society-India and colleagues found that 87 percent of the leopard’s prey biomass in this area actually consisted of domestic animals. The leopard’s favorite prey item appeared to be the domestic dog (Canis lupus familiaris), which alone contributed to 39 percent of its diet. The rest of the diet (13 percent) consisted of wild prey species—rodents, the Indian civet (Viverricula indica), some primates, mongoose and birds.

The area under scrutiny centered on the town of Akole, where population density was reported at 266 people per square kilometer in 2011. There was no natural forest within the study area, and the nearest protected area was 18 kilometers away. Athreya interviewed 77 households and was able to calculate the average density per square kilometer of domestic animals as follows, based on their accounts: goats (Capra aegagrus) 174, adult cattle (Bos taurus) 169, cats (Felis catus) 61, calves 54, and finally, dogs 24. These figures indicate that although domestic dogs comprise one of the smallest populations of all domestic animals, they are a preferred prey of leopards. Further calculations by the authors confirmed that the biomass of cats and dogs alone was sufficient to sustain the high density of leopards at this site.

“Our results show that the abundance of potential domestic prey biomass present in human-use areas supports a relatively high density of predators,” concluded the authors, “although this interaction could result in conflict with humans.”

Roads provide a unique venue for this human-conflict to take place, and by no means is such conflict restricted to leopards alone. Other species that fall prey to vehicular collisions, as reported by Gubbi and colleagues, include Axis deer (Axis axis), sambar (Rusa unicolor), black-naped hare (Lepus nigricollis), and even medium-to-large primates such as the bonnet macaque (Macaca radiata) and langur (Seminopithecus spp).

In the Mudumalai Tiger Reserve, the common Indian toad (Dattaphrynus melanostictus) was discovered to be most susceptible to vehicular traffic, accounting for over 50 percent of the total road kills, likely due to its small size and high numbers in general. In the Pench Tiger Reserve however, approximately 1.13 snakes were killed per 10-kilometer stretch of road every day. Gubbi informed us that the provisioning of bonnet macaques by tourists in their vehicles causes them to congregate by roads; ironically, this increases the risk they face from vehicle-related mortality. However, human involvement can be even more entrenched than the fondness of tourists for monkeys.

In the Kalakad Mundanthurai Tiger Reserve in south India, an annual festival attracts 200,000 religious devotees for a period of ten days each year to the temples within the Reserve. In a study in 2011, KS Seshadri and T. Ganesh discovered that mammals studiously avoided roads, and anurans, reptiles, and insects dominated road-related mortalities. A total of 1,413 individuals belonging to 56 species were found dead on the roads, 50 percent of which were nocturnal. Most startling was the change in these numbers during the festival itself—a 299 percent increase in road mortalities and 648 percent increase in specifically nocturnal species mortality.

This exponential increase in road-related mortality in India is a warning for the future—if vehicular traffic continues to increase, estimated at 10.5 percent growth rate during 2002-2012 according to Dr. Gubbi’s report, a dangerous threat to wildlife is emerging across India, the world’s second most populous country.

Vehicles, however, make no distinction between individual identity, species, or conservation status. When a leopard dies once every three months in Karnataka, and even then forms only a small proportion of the overall road kill in the area, road-related mortality must be acknowledged as a serious contender among threats to wildlife in India.

This article was originally written and published by Mrinalini Erkenswick Watsa, a contributing intern and writer for news.mongabay.com. For more information and the original article, please click HERE.