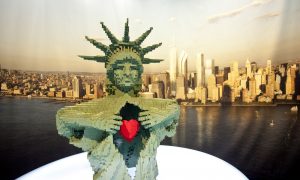 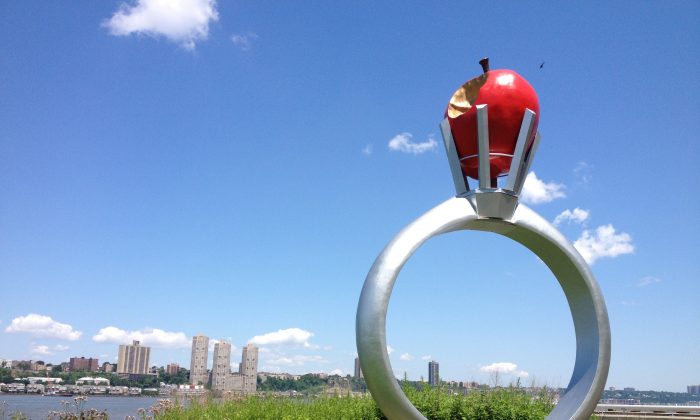 NEW YORK—Riverside Park just unveiled eight sculptures by international and New York City artists. Together they celebrate the unique setting of the Hudson riverfront, and the spirit of New York.

The installations are a result of the third annual Model to Monument program, in which the Art Students League of New York partners with the city’s parks to present works for public spaces. This year’s theme is “The public square: role and responsibility of the artist.”

Each artist chose a unique angle on the theme, displaying their own tastes and perspectives, but all works manage to bring together elements that highlight the people and spirit of the locale.

Artist Sherwin Banfield took inspiration from the rigorous training he underwent for a triathlon in 2009. His group of sculptures, “Transition Through Triathlon,” celebrates the “determination, patience, and commitment” of athletes.

The figures, each representing a mental state of an athlete in training, serve as subtle encouragement to joggers on their way.

John N. Erianne’s “A Frolicking Stray” is his first large work and his first time working in aluminum.

The sculpture of a young woman leaping in a tutu stands 12 feet tall, extending into a rocky area on the water’s edge. It took him 4 months of “pounding” on the sheets of metal, Erianne said.

The sculpture is a ring whose setting holds a bitten red apple. Through this endeavor she hoped to discover the meaning of love.

“After Adam and Eve bit into an apple, they came upon troubling times,” she said. “But that was what allowed history to begin.”

“I want this to be a gift to all the lovers of New York City and be a catalyst to have deep conversations for people engaged to the city and the park.”

Morito Yasumitsu’s elegant and haunting statue “Spirit” is installed on a part of a walkway that rounds into the river. A female nude overlooks the Hudson, emerging from what the artist describes as a “melting pot.” She holds herself delicately as if contemplating her new and fragile identity.

Anne Stanner’s “Wave” is a commentary on the ecology of the river. She learned years ago that a highway project in the 1980s was scrapped to protect the striped bass habitat in the Hudson.

Her sculpture is of fish swimming and leaping among “stylized curved triangles” arranged to mimic the whirring movement of a wave. The shape, perhaps not coincidentally, looks like the blades of an engine or turbine, and calls to mind the destructive forces of industry.

Anna Kuchel Rabinowitz’s two “Preservation” pieces deal with issues of global warming. She was explicit in saying that each element of her sculptures has a specific meaning. In one, a little boy overlooks a rising river. In the other, the artist collected quotes from people in the park about what makes life meaningful and worth preserving.

Beñat Iglesias Lopez, originally from Spain, on the other hand, was enigmatic in describing his whimsical looking piece, “The Bathers.”

“People like to jump to conclusions. I want everyone to come up with their own story,” he said.

All the sculptures can be seen in Riverside Park between 59 and 70 Streets.

The Art Students League of New York was founded in 1875 and is one of the city’s premier art schools.

Currently, the city parks boast over 800 monuments, 300 of which are sculptures, according to William T. Castro, parks Manhattan borough commissioner. Over the past 40 years, the city has featured public art from over a thousand artists.