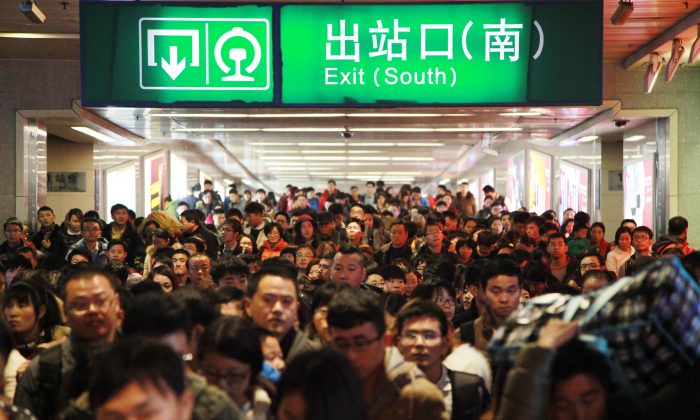 If you want to have a functioning market, you have to stick with it in good times and bad. China never really let the market rule in good times, but at least it could pretend it had invented its own brand of state-controlled capitalism.

Now that things are going from bad to worse, China still doesn’t want a 100 percent market. The problem is, it has liberalized the stock market and the exchange rate enough for Mr. Market to get a foot in the door.

While the New Year started badly with a 7 percent stock crash on Jan. 4 and a currency meltdown on Jan. 6, Mr. Market burst through the central planning door on Jan. 7.

Thursday, Jan. 7, will go down as the shortest trading session in Chinese history—it lasted less than 30 minutes with the Shanghai Composite Index down more than 7 percent at 3,125 at the end of trading. Why so short? Did traders want to take the rest of the day off in preparation for Chinese New Year?

No, they were scared that so-called circuit breakers would halt trading before they could complete all of their sell orders. Ironically, this fear caused a flood of sell orders, which pushed prices so low that the circuits broke and trading shut down for the day.

The circuit breaker kicks in when there’s a 5 percent rise or fall on the main share index and automatically halts trading for 15 minutes; a shift of 7 percent triggers trading to stop for the day.

“If today you have this break, tomorrow everybody will want to run away as soon as possible,” said Yao Yang, professor at the China Center for Economic Research, at a panel discussion in New York on Thursday.

The Chinese stock exchange only installed this system in December after the lessons of the summer of 2015 stock market crash. It thought it would make investors more rational and prevent excessive sell-offs. It did the opposite.

Or in the words of Macquarie research analysts: “Efforts to control the market and enforce an arbitrary pricing floor have had less-than-ideal consequences.” An understatement if there ever was one.

If there is anybody due for an early holiday, it’s David Cui and his analysts at Bank of America. They predicted the Shanghai Composite to drop 27 percent over the year—it’s already halfway there in just the first week of January.

According to official figures released Jan.7, China had to sell a record $108 billion in foreign exchange reserves (FER) in December, bringing the total for the year to $513 billion. China now has $3.3 trillion left.

But why sell in the first place? According to professor Lu Feng of Peking University, “China is at the trough of its cyclical adjustment” and will keep growing at around 7 percent. He seems to be one of the few people left to believe this.

Chinese people are voting with their money, and they are voting the current system out of office. According to Epoch Times estimates, as much as $1.2 trillion of capital left China in 2015. Throughout the year, China sold U.S. dollars to prevent the currency from crashing.

After the IMF admitted China to its international reserve currency basket in November, the People’s Bank of China let the yuan drop slowly throughout December. Observers, including this publication, then thought China made the smart choice of letting the currency drop and at least keep its stash of reserves.

The fact that China had to sell a record amount of FER and depreciate the currency, means that the PBOC is losing control. According to Macquarie, the yuan will drop at least another 5 percent against the dollar and this gradual devaluation will cost the PBOC at least $400 billion in 2016.

“Further devaluation is not good for the United States and is not in the interest of China. China wants to maintain a reasonably strong currency,” says Yao Yang. But maybe Mr. Market has a different idea.

Mr. Market forced the PBOC to set the fixing for the currency 0.5 percent lower on Jan. 7, the biggest drop since the shock-devaluation of August 2015.

The yuan is down 1.85 percent against the dollar during 30 days of record intervention. If this trend continues for 2016, we are looking at a 20 percent devaluation, not 5 percent.

Because after all, the currency works like the stock market, only without a circuit breaker. The market knows the central bank is going to let the currency drift lower, and traders are following the classic rule of “who sells first, sells best,” leading to precisely the panic selling that the PBOC wants to avoid.

At which price will traders decide to turn around and buy again? This, only Mr. Market knows.