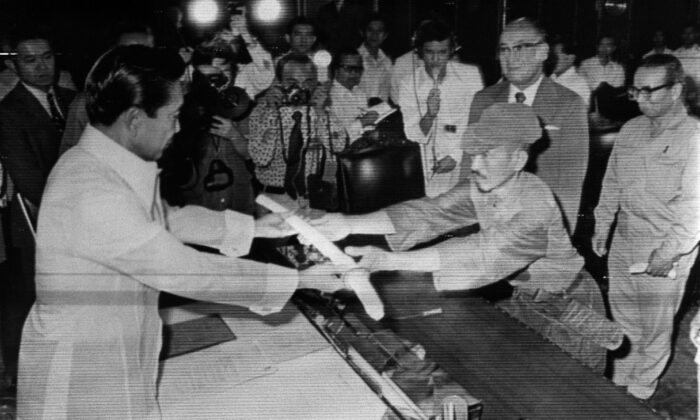 Former Japanese imperial army soldier Hiroo Onoda (R) offers his military sword to former Philippine President Ferdinand Marcos (L) to express his surrender at the Malacanan Palace in Manila on March 11, 1974. Onoda, who hid in the Philippine jungle for three decades because he did not believe World War II was over, died in Tokyo on Jan. 17, 2014, at the age of 91. The former soldier waged a guerrilla campaign in Lubang Island near Luzon until he was finally persuaded in 1974 that peace had broken out. (JiJi Press/AFP via Getty Images)
Viewpoints 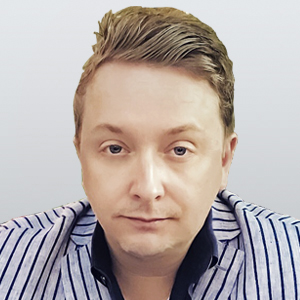 In 1974, Japanese explorer Norio Suzuki hacked his way into the Philippine jungle in search of the last known Japanese soldier who still believed he was fighting for the emperor in World War II.

The war had been over for 29 years. Onoda was one of a handful of Japanese troops who never got word they had lost. Never heard the call to surrender. Now a middle-aged man in a tattered uniform, Onoda was not only doing his best to wage a one-man guerrilla war, he was still so devoted to his country and his emperor that he refused to come out of the jungle and go back home to Japan.

I can’t help but think about Lt. Onoda when I see the Democrats react to President Donald Trump’s acquittal, the victories he’s racking up, and his rise in the polls.

The Democrats and the deep state launched a bitter and divisive war against Donald Trump before he was even president. FBI Director Christopher Wray admitted just last week that the Bureau illegally spied on Trump associate Carter Page. The FBI used the fraudulent Steele Dossier, which was bought and paid for from a foreign source by associates of Hillary Clinton and her campaign through the shady and shadowy Fusion GPS operation.

They commissioned the creation of that pack of lies as an “insurance policy”—if you read between the lines of the amorous texts between FBI agents Peter Sztrok and Lisa Page—against Trump’s election.

This illegal spying on an American citizen, for the purpose of taking down Trump’s presidential campaign and then his presidency, based on a Clinton-engineered fraud on the American people, formed the basis of the Russia hoax.

That hoax stalked the first three years of Trump’s presidency but ultimately failed, and the Democrats should have moved on (and some of the deep state operatives should have been prosecuted). But they didn’t and weren’t. They waited a couple of weeks and then launched another deep state assault on President Trump.

From the Russia hoax they segued seamlessly into the Ukraine hoax, only this time they had an alleged whistleblower, and they actually impeached Trump. House Speaker Nancy Pelosi (D-Calif.) could no longer hold back her kamikaze troops in the House.

After months of tearing the country apart over nothing, drafting another pile of fraud in the form of articles of impeachment, the Senate examined the case and duly acquitted the president.

But even this clear outcome has not stopped the Democrat bitter-enders. The Democratic Party’s left wing is now obsessed with one thing and one thing only: destroying Trump by any means necessary, even if they destroy the country and the Constitution at the same time. They will lie. They will support socialists. Whatever it takes to get Trump.

Pelosi, who originally opposed impeachment but ended up driving it through the House on partisan votes, provided the first glimpse of the Democrats’ obsession.

Immediately after President Trump delivered his brilliant State of the Union address, Pelosi ostentatiously ripped the text of the speech he had provided her. That text was an official record. Pelosi ripped it up to please her far left House Democrats and their deranged base; never mind how independent and Republican voters would react. She didn’t care.

The following day she claimed she ripped it because it was nothing but lies. But NBC fact-checked the speech and found that Trump had told the truth, just has he did during the Russia hoax, and just as he did during the Ukraine investigation and impeachment.

So Pelosi lied, and a few pages died. And with them, any pretense that the Democrats aren’t, as Democratic strategist James Carville noted this week, “losing [their] damn minds.”

Rep. Jerrold Nadler (D-N.Y.) provided the next view of Democrat obsession and descent into madness. No sooner had Trump been acquitted—found not guilty—by the Senate, Nadler vowed to continue with subpoenas and committee hearings and investigations.

“The investigations and oversight will continue,” crowed Rep. Carolyn Maloney (D-N.Y.), right before she donned a threadbare Imperial Japanese Army uniform and followed her deranged commander Nadler into the Philippine jungle.

They’re obsessed. Carville is right. They’re losing touch with reality. They’ve thrown everything possible at Trump, from the deep state to a deeply dishonest attempt to make him the first president ever forcibly removed from office, and he has only grown stronger. And that’s making them even crazier.

They’re fighting on long past the point of having lost the war. Senate acquittal should have been their call to surrender, and fight Trump the way they’re supposed to—at the ballot box in November.

Comparing them to Lt. Onoda actually does him a disservice. At least Onoda believed he was still fighting for his country and still following his commander’s orders. Democrats like Pelosi, Nadler, Maloney, and the insane clown posse of liberalism are only fighting for the far left of their party. They abandoned the nation’s well-being long ago.

Pelosi has lost control. Joe Biden has lost his faculties. It’s AOC’s party now and she’s not about to haul anyone out of the jungle. The Democrats have no sane commander, no elder statesmen, and no leaders left to order them to come out of the jungle and let the nation have a normal life.