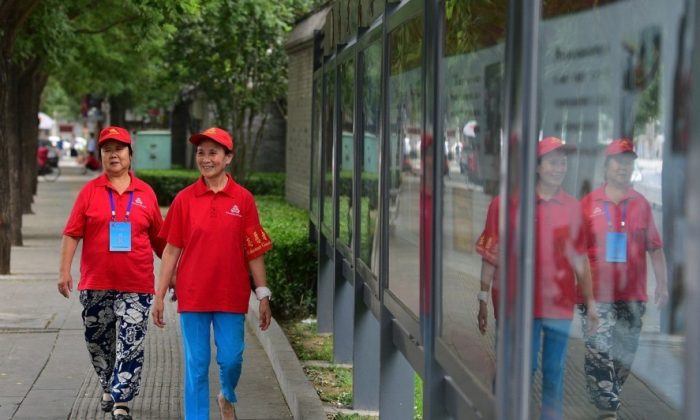 While elderly Chinese women have made foreign headlines for eccentric behavior, from gigs in front of the Louvre to poker games at international airports, for decades the communist establishment has had a more insidious function for this large population of “grandmothers”—monitoring and spying on their fellow citizens.

Just like the network of informants that saturated East Germany before the fall of the Berlin Wall, these women form a large percentage of the “volunteer public order workers” in Beijing. They are mobilized by the Party’s public security agencies and take on roles like patrolling, oral propaganda, guarding buildings, and manning checkpoints.

All these details, and more, were revealed in a recent report by Beijing Youth Daily, which shed light on a surveillance system that is little known outside China.

The grandmothers make up about 70 percent of the volunteer workers in Xicheng District, Beijing, according to the district’s Deputy Party Secretary Wang Jing.

Echoing the East German experience, Beijing’s urban volunteer monitors also serve as informants who not only help maintain order but also tip off the Party about their fellow citizens’ political views.

Before the reunification of Germany in 1989, the communist regime’s secret police made use of  hundreds of thousands of professional and unofficial informants to surveil the population.

“If there isn’t much else going on, [the volunteers] could look into someone’s private life, hopefully to dig up some dirt about them and report it to the authorities,” said Li Hongkuan, former editor of VIP Reference, one of the earliest electronic newsletters distributed in China that carried news about corruption and social issues.

Speaking to Radio Free Asia (RFA), Li said that such practices were common during the Cultural Revolution as a means of collecting information to be used against individuals during political struggle, but hardly suited for a society supposedly governed by law.

“In a society where there is strict rule of law, it would be hard to get legal approval. Eight or nine cases out of ten the volunteers report might be false alarms. What they are doing can cause others quite a lot of inconvenience,” Li said.

The volunteers are sometimes given some compensation for their time. According to the Beijing Youth Daily report, 753 urban monitors had been awarded a total of about $90,000 for providing valuable tips to the police from January to April. Between mid-2011 and 2014, 3,000 workers received a total of $336,500.

Eight or nine cases out of ten the volunteers report might be false alarms. What they are doing can cause others quite a lot of inconvenience.
— Li Hongkuan

The public order volunteers are a common sight in Beijing, where each district and county in Beijing has its own volunteer group for social security. They typically don red badges and caps over casual dress, toting their palm-sized, 22-page booklets that designate seven types of people, three different items, and three types of events that warrant immediate notification of the police. (Reports did not specify exactly what these categories were, but political dissidents, Falun Gong practitioners, and others, are all often targeted by such surveillance measures.)

But despite the incentives for public and low-key informants, the volunteer system has only seen enthusiastic recruitment from certain districts in Beijing and has failed to catch on elsewhere, a Chinese Web writer surnamed Liu told RFA.

“The Chinese authorities tried to expand it nationally, specifically in Beijing and other major cities, but it has turned out to be difficult,” Liu said. “In Beijing’s Xicheng and Chaoyang districts, there are many Party officials. Perhaps the overall level of political enlightenment is high and so they like to spy on others.”